Presidential Battle, the Elephant Needs to Go Down
(Image by Christos Georgiou)   Details   DMCA
The elephant (and I mean the rampaging, stomping, trumpeting one) in the political room is Donald Trump. He must be removed.

Now, I, a man denied the right to vote by his then-home state (Oklahoma) in 2000 for Ralph Nader, after whom I had the honor to speak in 2011 at the White House with VFP, supported Bernie since 2015. He wasn't Nader, and I thought about certain emergency appropriations he voted for to fund the war in Afghanistan, on which Senator Obama also voted yea, before being elected President.

But after about $800 of contributions and casting what I knew to be two useless votes in my state's last two Democratic presidential primaries, I now acknowledge Bernie for what he is and stands for with his base, which are by no means all hard leftists: he represents the hopes of various kinds of idealists.

He is-- uh, was-- a candidate that we who still have some ideals could vote FOR. I harbored such idealistic thoughts when I, a man who was losing nothing in the Great Recession, because everything I owned or own today I bought for cash only, voted for Obama in '08.

Bernie has been the only such candidate running against the Republicans for the last two elections. If the Bernie-bro stoner millennial sub-base had showed up at the polls, it might have changed something. Students don't show up for important elections is a truism.

On the other hand, I believe that Bernie missed an important-- maybe- crucial, and winning-- opportunity TWICE by failing to contrast his youthful years as an arrested supporter of the Civil Rights Movement, to the same years when Hillary was still a Young Republican, and now, again, when Biden has this cachet with Blacks that conventional pundits all declared that Bernie could never overcome.

Biden was never forced to explain this cachet in any head-to-head public way with Bernie, and for that, we can of course mostly blame the intervention of the coronavirus outbreak, which has put a halt for the foreseeable future to large crowds of any kind (including musical ones; my business is becalmed).

And, though this might seem paradoxical, given that Sanders is a firebrand, perhaps Bernie was just too polite to bring that issue up, particularly since he was, ostensibly, still competing with the other Democratic candidates. When Biden was talking about his Black-constituency firewall, then would have been the time for Bernie to establish himself as the alternative to a Biden who was going nowhere after Iowa and New Hampshire.

But by the South Carolina primary Bernie had not taken this advantage, and by then it was too late.

I wonder why he never used it, and why none of his staff ever pointed out this contrast to him in either presidential campaign he has waged. It's been clear to me ever since reading about it, with pictures, from 1963.

Now, one of the hypnotic suggestions that Donald Trump has used very effectively with his enormous base component of low-information voters is that there is some sort of Cold-War-style threat to America posed by "socialism" and "socialists," when in fact, owing partly to the Information Age, which has put citizens behind their computers for a great deal of the time which in an earlier, industrial-age day might have been spent actually socializing-- you know, like, organizing-- there are very few actual leftists, uh, left, in the US, and most of us are seniors.

It may very well be that the right-wing propaganda people have been listening to-- immersed in-- since World War Two makes it impossible for a Bernie Sanders to win a majority of Americans of good will and sufficient political education to make him the candidate who makes sure Donald Trump does not continue to degrade and destroy us (though all the polls I've seen recently say that either Biden or Sanders are winners over Trump by more than the polls' margins of error). It's not Bernie's fault.

Do any of y'all live in southern states? You know how useless your ballot can get. My votes for Dr. Stein in the last two general elections were such votes, but were no more wasted than my votes for Obama, who lost Mississippi but won re-election, or a vote for Hillary Clinton would have been if I had cast it-- but you cast them anyway.

And so, with the hope, perhaps the vain hope, that the Progressive part of the Democratic Party, and millennials, will truly become the agenda-setters in that party after a one-term Joe Biden presidency, and seeing the elephant chuckling (didja ever hear an elephant chuckle!? He gets off on it) as he smashes and bashes American public and political civility, the democratic process, and whatever world political leadership stature America might have had before he became POTUS, I'm going to cast my third useless vote in a row (Biden, for all his cachet, will lose my state by no less than 53-47%) for Biden.

And I hope all of you in battleground states will hold your noses and do so, and be ready to hold Biden's feet to the fire after election. If the coronavirus has not been a terminal blow to the traditional American political process, that is.

I've spent a lot of years avoiding voting for lesser evils. But no matter for any and all things that can be adduced against Biden, Trump is such a far greater evil that his riddance must be Job One. 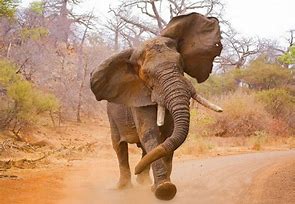