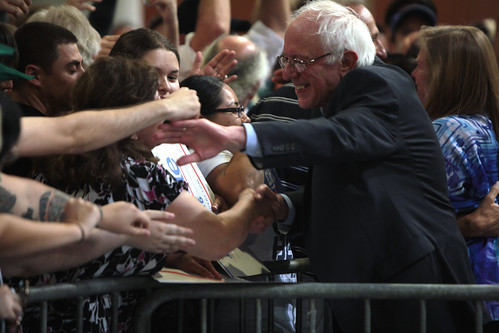 I guess the title should say trying to save the Democratic Party. The problem is that the consultant class thinks they know better. They are people like me who went to college and took Political Science. They taught us that the best way to win elections is to triangulate your opponents. Professors taught us that you don't want to go too far to the right or the left.

It is all logical; there is plenty of data to back up those theories. The problem that the polls don't know how to address is that voters think neither major party represents them. In other countries there are multiple parties, which gives most people a place to land. In the US there are two major parties that both depend on corporate donations to maintain their dominance.

If you think about it, it makes sense that the true corporate party is winning elections. The Republicans have been representing the billionaire class longer than the Democrats. It wasn't until the early '80s that people like Tony Coelho and Terry McAuliffe took the reins of the Democratic Party and forever changed its mission. Tony Coelho set out to prove that the Democrats could raise just as much corporate cash as the Republicans. Terry McAuliffe was the first party chair elected by the "third way" Democrats.

The focus on corporate cash allowed the billionaire class to buy influence in the Democratic Party, thereby gaining control of the whole government. The Democrats were still more liberal than the Republicans, but they moved to the right. For a while, the party continued to be influenced by real progressives like Ron Dellums, Paul Wellstone, and even Bernie Sanders. From the '80s to 2016, progressives have become less influential over the direction of the party.

I'm not arguing that in 1975 progressives controlled the Democratic Party. I am saying that they had a stronger influence and the party itself was to the left of where it is today. The reason for the shift was sound politics. It was logical, and polling backed up the strategy.

Scott Galindez is a graduate of Syracuse University, a US Army veteran, and currently the Political Director of ReaderSupportedNews.org. Scott's activism began at an anti-nuclear vigil in Lafayette "Peace Park" across from the White House. Scott (more...)
Related Topic(s): Democratic Party; Democratic Sellout; Progressives, Add Tags
Add to My Group(s)
Go To Commenting
The views expressed herein are the sole responsibility of the author and do not necessarily reflect those of this website or its editors.