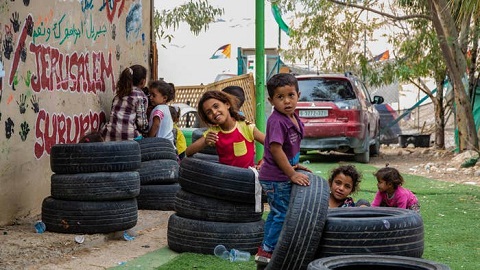 After lengthy delays, the United Nations finally published a database last week of businesses that have been profiting from Israel's illegal annexation and settlement activity in the West Bank.

The UN High Commissioner for Human Rights, Michelle Bachelet, announced that 112 major companies had been identified as operating in Israeli settlements in ways that violate human rights.

Human Rights Watch, a global watchdog, noted in response to the list's publication that the settlements violate the Fourth Geneva Convention. It argued that the firms' activities mean they have aided "in the commission of war crimes".

The companies' presence in the settlements has helped to blur the distinction between Israel and the occupied Palestinian territories. That in turn has normalised the erosion of international law and subverted a long-held international consensus on establishing a viable Palestinian state alongside Israel.

Work on compiling the database began four years ago. But both Israel and the United States put strong pressure on the UN in the hope of preventing the list from ever seeing the light of day.

The UN body's belated assertiveness looks suspiciously like a rebuke to the Trump administration for releasing this month its Middle East "peace" plan. It green-lights Israel's annexation of the settlements and the most fertile and water-rich areas of the West Bank.

In response to the database, Israeli Prime Minister Benjamin Netanyahu threatened to intensify his country's interference in US politics. He noted that his officials had already "promoted laws in most US states, which determine that strong action is to be taken against whoever tries to boycott Israel."

He was backed by all Israel's main Jewish parties. Amir Peretz, leader of the centre-left Labour party, vowed to "work in every forum to repeal this decision". And Yair Lapid, a leader of Blue and White, the main rival to Netanyahu, called Bachelet the "commissioner for terrorists' rights".

Meanwhile, Mike Pompeo, the US secretary of state, accused the UN of "unrelenting anti-Israel bias" and of aiding the international boycott, divestment and sanctions (BDS) movement.

In fact, the UN is not taking any meaningful action against the 112 companies, nor is it encouraging others to do so. The list is intended as a shaming tool highlighting that these firms have condoned, through their commercial activities, Israel's land and resource theft from Palestinians.

The UN has even taken an extremely narrow view of what constitutes involvement with the settlements. For example, it excluded organisations like FIFA, the international football association, whose Israeli subsidiary includes six settlement teams.

One of the identified companies, Airbnb, announced in late 2018 that it would remove from its accommodation bookings website all settlement properties presumably to avoid being publicly embarrassed.

But a short time later Airbnb backed down. It is hard to imagine the decision was taken on strictly commercial grounds: the firm has only 200 settlement properties on its site.

Related Topic(s): Diplomacy; Foreign Diplomacy; Israel; Israel-Palestine Peace Talks; Israeli Settlements; Israeli_Propaganda; Palestine_and_Israel; Peace Talks Between Israel And The Palestinians; Trump Diplomacy; Trump Peace Plan, Add Tags
Add to My Group(s)
Go To Commenting
The views expressed herein are the sole responsibility of the author and do not necessarily reflect those of this website or its editors.