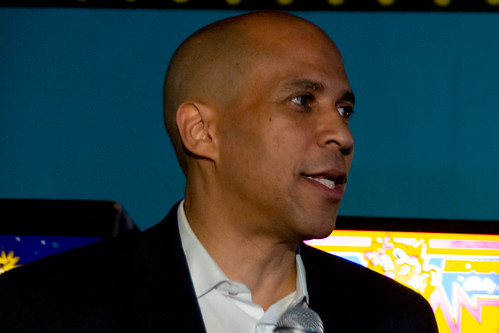 Senator Cory Booker has become a Pro-Nuke-Holocaust Denier and must not be president or vice.

As desperate mostly-young millions march worldwide for the survival of our Earth, Booker embraces explosive atomic 500-F climate killing machines that are roasting Her.

Any of our 96 badly run, rarely inspected US nukes could explode into a nuclear holocaust at any time.

In Booker's New Jersey, three dying public-subsidized nukes spew heat, radiation and carbon. Their safety is "guaranteed" by Trump's fake Nuclear Regulatory Commission. They're dangerously decrepit, but what's he done to to guarantee their safety? (Hint: they can't get private insurance).

40 years ago this month 90,000 eco-fans heard the Musicians United for Safe Energy Concerts over five nights in Madison Square Garden. Some 200,000 rocked our rally at Battery Park City.

But after the concerts I visited local farms, met the families, consulted their doctors...and veterinarians... The feds had long since predicted a reactor accident could wipe out an area the size of Pennsylvania and kill thousands.

At kitchen tables I heard awful tales of death and disease, of stillborn infants, dying children, Down's Syndrome, dead animals and orchards. I held a dog born with no eyes, saw a cat that couldn't stand, horses that couldn't breed, a pile of dead wild birds. The Baltimore News-American confirmed the stories, as did Dell/Delta's Killing Our Own: The Disaster of America's Experience with Atomic Radiation (now free on line), and others.

In 1996, in Kiev and Russia, I heard far more/worse stories from Chernobyl survivors. I will not return to Japan, where I'd joined giant marches demanding Fukushima not be built on seismic faults washed by tsunamis.

Over nearly a half-century of activism I've never met a No Nuker who denies climate change. Saving our eco-balance remains everywhere a major motivation to shut all nuke reactors before the next one blows up.

But now the come-lately genius Corey Booker tells us we're all Climate Deniers.

Related Topic(s): Booker-Cory; Climate; Holocaust; Nukes; Presidential Campaign; Radiation, Add Tags
Add to My Group(s)
Go To Commenting
The views expressed herein are the sole responsibility of the author and do not necessarily reflect those of this website or its editors.