If you are a woman living within 50 miles of a aging nuclear reactor here in America, your chances of giving birth to a stillborn child are increased...simply stated, in addition to other cancer risks associated with these dangerous reactors, they are also Nuclear Abortion Machines.  So, how is it that supposed Pro Life Christian Vice Presidential Candidate Sarah Palin endorses, even embraces the building of 45 brand new Nuclear Abortion machines by the year 2030?  Below is my article on this topic from my blog...hope you enjoy it.Wednesday, October 29, 2008
Sarah Palin Is Energy Nut Case-Calls For Socialized Energy 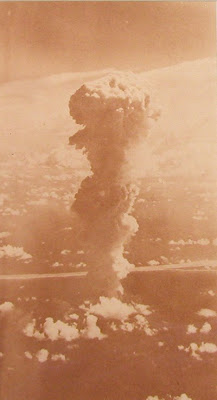 (Image by Unknown Owner)   Details   DMCA
CNN just carried Sarah Palin's speech from Toledo Ohio on Energy...the lady is a religious nut case with no firm grasp on the topic of Energy. She touts experience that is not there, and with every word out of her mouth, it becomes obvious that she is without a clue. First, her drill baby drill is offensive, and shows zero respect for the environment. This should not be a surprise as she has filed two law suits objecting to the Federal Government's placement of animals onto the endangered species list...why you might ask...because having. as example. Polar Bears on the list interferes with some of her own pet projects. Putting whales on the endangered species list in Alaska endangers her own SECOND BRIDGE TO NOWHERE, a $600 Million dollar bridge to serve the 7,000 residents of Wasilla, Alaska.

Her beloved pipeline might not even be built, and even if it makes it from the drawing board into reality, it represents a drop in the bucket, not a solution. When you put it into perspective, when you realize we would not see a cubic foot of gas from said pipeline before 2025, she is blowing smoke up our collective asses.

She goes on to say that she and John McCain will see to it that America will build 45 New nuclear reactors by 2030...sorry, but it cannot be done, and even if the obstacles could be overcome, are we prepared for Socialized Energy that rapes the American Taxpayer, and the American energy consumer, while ruining our environment, bringing cancers and birth defects to our doorsteps?

1. There is a horrific manpower shortage in the nuclear industry, and it will take at least one decade to address that shortage. The reality is simple...there are not enough qualified and trained employees to build, manage and operate 45 new reactors by 2030.

2. Even if the manpower issues were resolved, there is not enough manufacturing base to get the necessary parts to meet Sarah Palin's timeline for 45 new reactors. Further, the NEI, the NRC and our government is wrongfully assuming that American Communities will welcome these new reactors with open arms. They assume they can simply force communities already hosting old, outdated and problematic reactors into accepting FURTHER RISKS.

3. Wall Street will not fund 45 new reactors, which is why the nuclear industry wants our tax dollars to build those nuclear reactors, even though they will be owned and operated by private for profit companies. What is wrong with this picture? With our taxes, we build the reactors, but our government gives them over to private companies that will then BILL US FOR OUR ENERGY, energy being supplied because we built the facility...talk about a redistribution of wealth. Additionally, if Nuclear Energy is so SAFE, VITAL and SECURE, end the Price Anderson Act that keeps every American from getting nuclear accident insurance to protect their own assets, their own homes, their own health!

Further, nuclear cannot exist as a viable industry unless it remains always a socialized industry subsidized with our taxes in a never-ending  bailout. GNEP (the Global Nuclear Energy Program) asks the American Taxpayer to underwrite a $1.5 -$5 Trillion dollar nuclear reprocessing plant that might not even work. Further, and very important...the fuel that would be created if the process does work cannot be used in the 45 AP1000 Nuclear Reactors that John McCain wants to build! Even more deplorable, GNEP makes America the nuclear waste dump for the entire world's nuclear energy programs and reactors.
Are you as a citizen prepared to have China, Russia, North Korea and other rogue nations' wastes being shipped across the world's oceans to the doorsteps of America? Are you willing to risk your child, your wife, your husband, your mother having CANCER in the name of reprocessing fuel for a country that abuses human rights, oppresses the people of Tibet, imprisons their populations, putting them into forced labor camps, using them in the name of Capitalizing China?

Are you, your children and their children's children prepared to pay the costs that this international socialized Energy Program will bring about? With every new reactor comes more breast cancer, more childhood leukemia, more birth defects, more stillborn children. Nuclear Energy is AN ABORTION MACHINE that every Pro-Life American should be up in arms about. Sarah Palin is a hypocrite to claim she is Pro Life while endorsing a Energy Program that puts the unborn child at a far greater risk than abortion ever has or will. GNEP will make America the world's Nuclear Waste Dump, and with that new global responsibility, we are inviting a Holocaust into America of proportions that will far outstrip those visited upon the Jews with Germany's NAZI Death Camps.

Anti-Nuclear and environmental activist, publisher of two blogs on the subject of nuclear energy. Living less than three miles from Entergy's Indian Point, which is leaking tritium and strontium 90 into the Hudson, I write in the hopes of (more...)
Related Topic(s): Abortion; Abortion; Abortion Anti Choice Bush Propaganda; Abortion With Exceptions; Nuclear Energy Dev- Peaceful; Nuclear Energy- Weapons; Nuclear Waste; Nuclear Weapon Agreements; Nuclear- Waste; Ohio Primary; (more...) Ohio Republican Party; Palin Alaska Pipeline; Sarah Palin; Sarah Palin And Her IQ, Add Tags  (less...)
Add to My Group(s)
Go To Commenting
The views expressed herein are the sole responsibility of the author and do not necessarily reflect those of this website or its editors.

What Will Happen if Obama Has Presidency Stolen From Him?