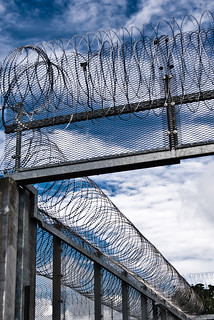 "Free worlders" is prison slang for those who are not incarcerated behind prison walls. Supposedly, those fortunate souls live in the "free world." However, appearances can be deceiving.

"As I got closer to retiring from the Federal Bureau of Prisons," writes former prison employee Marlon Brock, "it began to dawn on me that the security practices we used in the prison system were being implemented outside those walls." In fact, if Brock is right, then we "free worlders" do live in a prison--albeit, one without visible walls.

In federal prisons, cameras are everywhere in order to maintain "security" and keep track of the prisoners. Likewise, the "free world" is populated with video surveillance and tracking devices. From surveillance cameras in stores and street corners to license plate readers (with the ability to log some 1,800 license plates per hour) on police cars, our movements are being tracked virtually everywhere. With this increasing use of iris scanners and facial recognition software--which drones are equipped with--there would seem to be nowhere to hide.

Detection and confiscation of weapons (or whatever the warden deems "dangerous") in prison is routine. The inmates must be disarmed. Pat downs, checkpoints, and random searches are second nature in ferreting out contraband.

Metal detectors are now in virtually all government buildings. There are the TSA scanning devices and metal detectors we all have to go through in airports. Police road blocks and checkpoints are used to perform warrantless searches for contraband. Those searched at road blocks can be searched for contraband regardless of their objections--just like in prison. And there are federal road blocks on American roads in the southwestern United States. Many of them are permanent and located up to 100 miles from the border.

Prison officials open, search and read every piece of mail sent to inmates. This is true of those who reside outside prison walls, as well. In fact, "the United States Postal Service uses a 'Mail Isolation Control and Tracking Program' to create a permanent record of who is corresponding with each other via snail mail." Believe it or not, each piece of physical mail received by the Postal Service is photographed and stored in a database. Approximately 160 billion pieces of mail sent out by average Americans are recorded each year and the police and other government agents have access to this information.

Related Topic(s): Lockdown; Police; Police State; Prison - Mandatory Occupancy; Prison Industrial Complex; Prison Nation, Add Tags
Add to My Group(s)
Go To Commenting
The views expressed herein are the sole responsibility of the author and do not necessarily reflect those of this website or its editors.