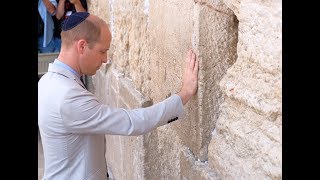 PRINCE WILLIAM, Duke of Cambridge, second in line to the British throne, visited Israel this week.

If the British had not left Palestine 70 years ago, William would now be my prince, too. I remember having a day off from school on his great-grandfather's birthday.

The British had obtained the League of Nations "mandate" over Palestine by posing as the protectors of Zionism (with the famous "Balfour Declaration). But they did not like us very much. The picturesque Arabs, gracious hosts by nature, attracted them much more strongly.

MY OWN relationship with the British crown has always been a bit complicated.

When I was 14 years old, the economic situation of my family compelled me to go to work. I found employment at a lawyer's office. The boss had studied at Oxford, and all our business was conducted in English, a language I had to learn in a hurry, and that I have loved ever since. Some of our clients were members of the British administration.

A few months later, the British hanged a young Jew who had thrown a bomb at an Arab bus. I decided to fill his place and got in contact with the Irgun underground. I was instructed to present myself at a certain school building at a certain time.

When I approached the building, it seemed totally deserted, except for a young couple kissing in the doorway. I was shown my way in the dark and ushered into a room, where I was seated facing a dazzling light. I felt, rather than saw, people around me.

A voice from the darkness asked me several questions, and then it asked: "Do you hate the Arabs?"

"No'" I answered truthfully. Working in the courts I had met a number of Arab colleagues, and they seemed nice people.

For a moment, the people behind the projector were dumbfounded. Then a young woman's voice asked: "Do you hate the British?"

Foolishly, I told the truth: "No! I rather like them."

Behind the projector, there was a deep silence. Then the female voice asked: "If you don't hate the British, why do you want to join the Irgun?"

"I want them to go back to Britain and leave us alone." I answered.

Related Topic(s): Arab; Israel; Jerusalem; Prince William, Add Tags
Add to My Group(s)
Go To Commenting
The views expressed herein are the sole responsibility of the author and do not necessarily reflect those of this website or its editors.