Washington and the Convict Appointed to Overthrow Venezuela Continue the Lies 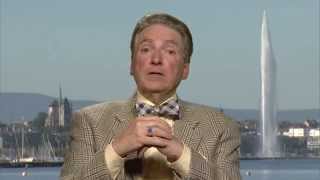 Alfred de Mayas Independent Expert on the Promotion of a democratic and equitable international order.
(Image by You Tube)   Details   DMCA

Don't you think something is fishy when the presstitutes orchestrate a fake news "humanitarian crisis" in Venezuela, but totally ignore the real humanitarian crises in Yemen and Gaza?

Don't you think something is really very rotten when the expert, Alfred Maurice de Zayas, sent by the UN to Venezuela to evaluate the situation finds no interest by any Western media or any Western government in his report?

Don't you think it is a bit much for Washington to steal $21 billion of Venezuela's money, impose sanctions in an effort to destabilize the country and to drive the Venezuelan government to its knees, blame Venezuelan socialism (essentially nationalization of the oil company) for bringing "starvation to the people," and offer a measly $21 million in "humanitarian aid"?

As the United States is completely devoid of any print or TV media, it falls upon internet media such as this website to perform the missing function of honest journalism.

As for the alleged starvation and humanitarian crisis in Venezuela, Zayas has this to say:

The December 2017 and March 2018 reports of the Food and Agriculture Organization of the UN (FAO) list food crises in 37 countries. "The Bolivarian Republic of Venezuela is not among them."

"In 2017, the Bolivarian Republic of Venezuela requested medical aid from the Global Fund to Fight AIDS, Tuberculosis and Malaria, the plea was rejected, because Venezuela 'is still a high-income country ... and as such is not eligible.'

"The 'crisis' in Venezuela cannot be compared with the humanitarian crises in Gaza, Yemen, Libya, the Syrian Arab Republic, Iraq, Haiti, Mali, the Central African Republic, South Sudan, Somalia, or Myanmar, among others."

In paragraph 37 of his report, de Zayas says: "Modern-day economic sanctions and blockades are comparable with medieval sieges of towns with the intention of forcing them to surrender. Twenty-first century sanctions attempt to bring not just a town, but sovereign countries to their knees. A difference, perhaps, is that twenty-first century sanctions are accompanied by the manipulation of public opinion through 'fake news,' aggressive public relations and a pseudo-human rights rhetoric so as to give the impression that a human rights 'end' justifies the criminal means. There is not only a horizontal juridical world order governed by the Charter of the United Nations and principles of sovereign equality, but also a vertical world order reflecting the hierarchy of a geopolitical system that links dominant States with the rest of the world according to military and economic power. It is the latter, geopolitical system that generates geopolitical crimes, hitherto in total impunity."

He expresses concern about the level of polarization and disinformation that surrounds every narrative about Venezuela. "A disquieting media campaign seeks to force observers into a preconceived view that there is a 'humanitarian crisis' in the Bolivarian Republic of Venezuela. An independent expert must be wary of hyperbole, bearing in mind that 'humanitarian crisis' is a term of art (terminus technicus) that can be misused as a pretext for military intervention."

A political solution is blocked because "certain countries [the US] do not want to see a peaceful solution to the Venezuelan conflict and prefer to prolong the suffering of the people of that country, with the expectation that the situation will reach the threshold of a humanitarian crisis and provoke a military intervention to impose a regime change."

Related Topic(s): Presstitutes; Sanctions; Venezuela Oppositions Terrorism, Add Tags
Add to My Group(s)
Go To Commenting
The views expressed herein are the sole responsibility of the author and do not necessarily reflect those of this website or its editors.