Click Here to Remove All Ads
We've heard plenty about Obama's post Labor Day job creation speech, but will it contain anything that might actually work? 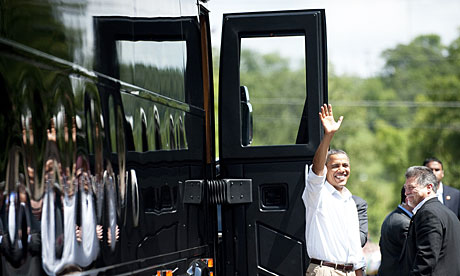 (Image by Unknown Owner)   Details   DMCA
Barack Obama in Minnesota on his recent bus tour, where he touted trade deals
as a solution to US unemployment. Photograph: Jim Watson/AFP/Getty Images

President Obama has discovered how serious the recession is. That's what he told an audience in Chicago last week. To be fair, he was referring to revised data from the commerce department showing that the fall-off in GDP was larger than originally reported.

But ridicule is appropriate. He and we knew all along how many people were out of work. The employment numbers told us the size of the hole and the desperate need for government action.

This sort of ridiculous comment, and President Obama's weak response to the recession over the first two-and-a-half years of his presidency, explains the tidal wave of skepticism facing his widely hyped upcoming speech on jobs after the Labor Day weekend. The list of remedies leaked ahead of time does little to inspire hope.

At the top of the list of job-creating measures is extending the 2 percentage-point reduction in the social security payroll tax. This provides no boost to the economy, since it just keeps in place a tax cut that was already there, but if the cut is allowed to end at the start of 2012, it will be a drag on growth.

As it stands, the social security program is being fully reimbursed for the lost tax revenue, but there is always the possibility that Republicans will use this as a basis for attacking the program. Given President Obama's willingness to support cuts to social security, it is understandable that this part of his jobs agenda doesn't generate much enthusiasm.

A second item frequently mentioned is an infrastructure bank. This would allow the government to treat long-lived infrastructure investment as capital expenditures depreciated over their expected lifetimes, rather than expenditures to be paid for in full in the years the construction takes place. This is good policy and accounting (it is the same approach used by both private businesses and state governments), but it is not going to create many jobs and certainly not in the next couple of years.

The other items on the list are less clear. On bad days, we hear that President Obama is going to tout the trade agreements with Panama, South Korea and Colombia. These deals are all problematic at best, but even their supporters can't claim with a straight face that they will generate any noticeable number of jobs.

There are also reports that President Obama may propose some sort of tax subsidy for job creation. Such a subsidy can be bad or not so bad. One of the proposals, temporarily eliminating the employer side of the payroll tax, is a great plan -- if your intention is to give still more money to business and undermine social security.

There is extensive research showing that increases in the minimum wage of 15-20% have no measurable impact on employment. If raising the cost of labor by 15-20% doesn't reduce employment, then we can't think that reducing the cost of labor by 6.2% as a result of temporarily eliminating the payroll tax will increase employment. (Sorry, Mr President, logic can be cruel.) This means that we should expect few jobs will be created by this sort of subsidy; we will just be further supplementing the record profit share of national income.

And if we pursue that policy, we will also be raising further questions about social security. It is important to remember that if the point is simply to hand a specific sum to business or individuals, we can do this without ever mentioning "social security" at all. In other words, if the point is to give businesses a tax subsidy equal to 6.2% of their payroll, then we can just specify that they get a tax credit equal to 6.2% of their payroll. It is understandable why Republicans, who explicitly want to end social security as we know it, would insist on tying the subsidy to the social security tax. It is hard to understand why President Obama would adopt the same approach.

Of course, we should not be defeatist about creating jobs. Anyone who cares knows how to do it.

At the top of the list should be a jobs program for young people that would be modeled on the Civilian Conservation Corps. There are many parts of the country where the unemployment rate for young people is 40-50%. These young people have no realistic prospect of getting jobs. Giving them work at or near the minimum wage, cleaning up streets, parks and abandoned buildings in their neighborhood, can make a big difference in their lives -- and considerably enhance those localities.

A more far-reaching policy would be to promote work-sharing as an alternative to layoffs. The money that is paid out in unemployment insurance could instead subsidize shortened work hours. If just 10% of the people who lose their jobs each month could be retained with this policy, it would be create another 2.4m jobs a year. This policy has been so successful in Germany that its unemployment rate is now lower than before the downturn even though its growth has been almost the same as ours.

Finally, getting the dollar down is the most important long-term job creation policy. If we managed to get back towards balanced trade, it would lead to almost 6m manufacturing jobs.

On past form, however, President Obama seems unlikely to go for real job-creation measures. Look forward to being disappointed -- especially if you're one of the unfortunate unemployed.

Dr. Dean Baker is a macroeconomist and Co-Director of the Center for Economic and Policy Research in Washington, D.C. He previously worked as a senior economist at the Economic Policy Institute and an assistant professor at Bucknell University. (more...)
Related Topic(s): Jobs; Obama Effect; Obamanomics, Add Tags
Add to My Group(s)
Go To Commenting
The views expressed herein are the sole responsibility of the author and do not necessarily reflect those of this website or its editors.