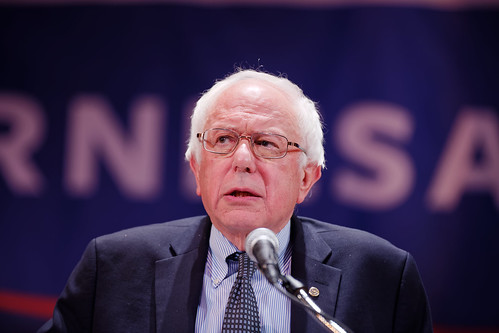 When we began this campaign a little over a year ago, we had no political organization, no money and very little name recognition. The media determined that we were a fringe campaign. Nobody thought we were going anywhere.

Well, a lot has changed over a year.

During this campaign, we won more than 12 million votes. We won 22 state primaries and caucuses. We came very close -- within two points or less -- in five more states.

In other words, our vision for the future of this country is not some kind of fringe idea. It is not a radical idea. It is mainstream. It is what millions of Americans believe in and want to see happen.

And something else extraordinarily important happened in this campaign that makes me very optimistic about the future of our country -- something that, frankly, I had not anticipated. In virtually every state that we contested we won the overwhelming majority of the votes of people 45 years of age or younger, sometimes, may I say, by huge numbers. These are the people who are determined to shape the future of this country. These are the people who ARE the future of this country.

Together, in this campaign, 1.5 million people came out to our rallies and town meetings in almost every state in the country.

Together, hundreds of thousands of volunteers made 75 million phone calls urging their fellow citizens into action.

Together, our canvassers knocked on more than 5 million doors.

Together, we hosted 74,000 meetings in every state and territory in this country.

Together, 2.7 million people made over 8 million individual contributions to our campaign -- more contributions at this point than any campaign in American history. Amazingly, the bulk of those contributions came from low-income and working people whose donations averaged $27 apiece. In an unprecedented way, we showed the world that we could run a strong national campaign without being dependent on the big-money interests whose greed has done so much to damage our country.

And let me give a special thanks to the financial support we received from students struggling to repay their college loans, from seniors and disabled vets on Social Security, from workers earning starvation wages and even from people who were unemployed.

In every single state that we contested we took on virtually the entire political establishment -- U.S. senators, members of Congress, governors, mayors, state legislators and local party leaders. To those relatively few elected officials who had the courage to stand with us, I say thank you. We must continue working together into the future.

Related Topic(s): Bernie Sanders; Political Values; Revolution; Rights, Add Tags
Add to My Group(s)
Go To Commenting
The views expressed herein are the sole responsibility of the author and do not necessarily reflect those of this website or its editors.