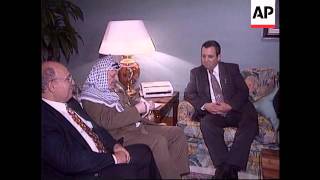 Let's state the following premise at the outset: Israel since its inception in 1948 has never intended there be a separate Palestinian state.

Despite all the rhetoric of a two state solution creating a separate Palestinian state composed of the West Bank, Gaza, with its capitol in East Jerusalem by various Israeli prime ministers going all the way back to David Ben-Gurion, the supposed "negotiations" with the Palestine Liberation Organization starting with Yasser Arafat, the 1978 Camp David accord to the 1990's Oslo Accord, a separate Palestinian state has never been established because the State of Israel never intended for it to happen. Why one may ask?

Well -I'm being overly simplistic here-for Jews the land of Israel was bequeathed by God over 2500 years ago on land that now includes the West Bank and Gaza. Therefore Palestinian Arabs on that land are merely "squatters" on Jewish land. So if Palestinian's are "squatters" it is only "right" for Jews-particularly orthodox Jews- to take back what is "rightly" theirs. Now it must be mentioned Israel in 2005 unilaterally withdrew from Gaza and all Israeli settlements were dismantled so when "Israeli settlements" are mentioned here it's those in the West Bank.

Of course Palestinian's don't see it this way. They've been on this land for hundreds of years. Palestinian's have built their homes there, cultivated the soil, planted and tended olive groves and prospered over many generations, well before the State of Israel was established.

And with Israel's success in the 1967 six day war against Egypt, Syria and Jordan whereby Israel captured the West Bank, Gaza, Jerusalem, seizing the Golan Heights from Syria, the Sinai Peninsula from Egypt-later ceded back to Egypt-Israel has systematically increased the number of Jewish settlements in the West Bank in the last 50 years driving off the Palestinian's, bull dozing their homes, uprooting the olive groves destroying the source of their economic existence.

Israeli settlements in the West Bank now number over 400,000 mostly orthodox Jewish settlers in settlement enclaves and defended by the IDF-Israeli Defense Force. These settlers hate and have no respect for the Palestinians-again seeing them only as "squatters" thus having no "right" to be there.

Since September 2000, Israel has built a 22' high wall around the West Bank intended to restrict Palestinian's from entering Israel proper, requiring permits and passage only through IDF manned checkpoints. Some roads are forbidden to Palestinian's for use only by Israeli settlers. It is all a policy of apartheid.

Yet most Americans have no knowledge of this brutality waged by Israel against the Palestinian's in their midst. The corporate MSM takes care of that making sure to report any occasional inaccurate rocket supposedly fired by Hamas from Gaza into Israel, Palestinian's throwing rocks at IDF soldiers or any odd incident of a Palestinian attacking an Israeli-as opposed to reporting Israeli settlers attacking Palestinian's .

It is always Israel acting in self defense and retaliating against Palestinian provocations as opposed to the frequency of Israeli brutality such as Israeli IDF bombing and killing some 2000 innocents in Gaza in 2014, attacking hospitals, schools as well as residences, as Israeli's cheered the slaughter sitting on lawn chairs in the nearby hills.

Though Israel receives some $3.5 billion each year in military aid approved by Congress Israel received an additional $450 million approved by the Senate-including Bernie Sanders and Elizabeth Warren-to cover the cost of that Gaza bombing campaign.

Meanwhile Gaza is literally an open air prison, an Israeli blockade prevents normal commerce, all goods coming into Gaza are inspected and Gaza fishermen are restricted from going beyond 3 miles off the coast.

So the initial premise of this short piece was Israel never intended there be a separate Palestinian state. A preponderance of evidence seems to bear this out. Though for all intent and purposes though it is the truth, it won't be admitted.

As with the Israeli nuclear arsenal that exists yet won't be acknowledged the same holds true for Israel to acknowledge a separate Palestinian state will ever come to pass because Israel never intended for there to be one.

Retired. The author of "DECEIT AND EXCESS IN AMERICA, HOW THE MONEYED INTERESTS HAVE STOLEN AMERICA AND HOW WE CAN GET IT BACK", Authorhouse, 2009
Related Topic(s): Brutality; Israel; Israel 1948; Israel And Palestine; Israel-Palestine Peace Talks; Israeli Attacks On Gaza; Israeli Government; Israeli Settlements; Palestinian State, Add Tags
Add to My Group(s)
Go To Commenting
The views expressed herein are the sole responsibility of the author and do not necessarily reflect those of this website or its editors.