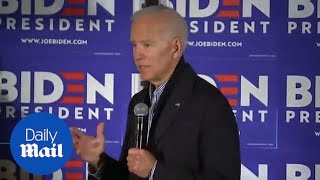 The New York Times recently decided to make what has been painfully obvious about Joe Biden and his campaign from the onset the subject of a feature story. In typically understated tones, the Times informed us, Joe Biden's Poll Numbers Mask an Enthusiasm Problem. Indeed.

In the piece Patrick Murray, director of Monmouth University Polling Institute, was quoted as saying from Iowa, "I did not meet one Biden voter who was in any way, shape or form excited about voting for Biden ... They feel that they have to vote for Joe Biden as the centrist candidate, to keep somebody from the left who they feel is unelectable from getting the nomination."

Author Jill Filipovic asked the simple question, "Does Anyone Actually Want Joe Biden to Be President?" The question remains on the table still.

I also touched on what I called Biden's enthusiasm deficit twice recently. Once on June 11 and again on June 26.

Why is voter enthusiasm so important in presidential politics? Everything hinges on it, starting with turnout. The Democratic strategy seems to rely at its core on the belief that Donald Trump is so egregious, so offensive that voters will turn out solely to defeat him, even if the alternative doesn't inspire them. But that isn't the history of US presidential elections.

You can make the case that George H.W. (Poppy) Bush won the 1988 election without a great deal of voter enthusiasm. But he was riding the coattails of one of the most popular presidents in US history, Ronald Reagan. It also bears noting that he was a one-term president.

Beyond that, you are hard pressed to cite a single instance of voters putting a candidate in the Oval Office as a matter of pragmatism. You can rest assured that the issues hurled on the kitchen table across America by Donald Trump will be raw red meat, and unless the Democratic base gets equally inspired, their candidate will likely be dead meat.

But it's not just the Oval Office. The downstream Congressional races often follow the trend of the presidential contest. Victories in the Congressional races will have a huge impact on the legislative impact any president can have. One very bad sign for Hillary Clinton was that the Democrats were faring poorly in the Senate and House races. A sure sign that there was no popular groundswell.

For the Democrats and their cable broadcasting allies to construct a false meme that Biden is the "secure and intelligent" choice sells out the process, denies reality, and invites disaster. Like it or not, Joe Biden has failed twice in his presidential bids and has no meaningful popular support now. That's not a good truth or a bad truth, it's the plain truth.

Sanders and Warren have the hearts and minds of the voters. The Democratic party needs to get busy nurturing and encouraging that rather that subverting it.

The Democratic base, for their part, need to become more vocal and assertive about their feelings. Left to the DNC and the cable giants, Joe Biden might well be installed as the Democratic nominee. That would be a recipe for disaster.

It's time to start pushing the point.

Related Topic(s): Issues; Joe Biden; Pragmatism; Presidency; Support; Voting, Add Tags
Add to My Group(s)
Go To Commenting
The views expressed herein are the sole responsibility of the author and do not necessarily reflect those of this website or its editors.