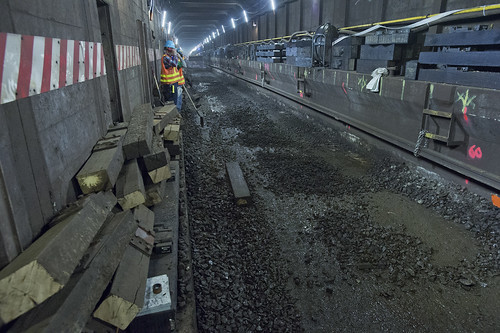 Our country needs to fix its infrastructure. With every bridge collapse, train derailment and water main breakage, this just becomes more and more obvious. The media exposes reason after reason after reason to do it, on OurFuture.org we write post after post about it, there is poll after poll showing the public begging for it ... and the response is Republican obstruction after Republican obstruction stopping it. Because "government spending."

Since the Reagan presidency we have been eating our seed corn with cutbacks. We are being penny wise and pound-foolish by not spending on maintenance. Because a stitch in time saves nine. And the collapse of a bridge or road or building or power grid or water main or train roadbed or a dam kills people and economies.

Even the Chamber of Commerce, no friend of the United States government or its people, is calling for public investment to fix the infrastructure.

There is no "cost" to the economy from fixing the infrastructure. With low interest rates, government gets the money to do it for free. The resulting economic and energy efficiency pays for it, and we all share in the increased prosperity. Not to mention all of the people who would be put to work doing the construction and maintenance, and all of the suppliers who would be getting a boost from the orders for supplies and parts.

This Week's Reason To Fix The Infrastructure

Here's this week's reason to fix our infrastructure. People need the work and fixing the infrastructure puts people to work. The Washington Post Wonkblog explains this problem, in "Why America's men aren't working":

"The size of the nation's workforce -- known as the labor force participation rate -- continues to fall. Since the start of the downturn, the percentage of that population that has a job or is looking for one has dropped more than 3 percentage points, to 62.6 percent, a level not seen since the 1970s.

"The problem is particularly pronounced among men between the ages of 25 and 54, traditionally considered the prime working years. Their participation rate has been declining for decades, but the drop-off accelerated during the recession. The high mark was 98 percent in 1954, and it now stands at 88 percent. ... the United States now has the third-lowest participation rate for 'prime-age men' among the world's developed countries."

Are all of these men drummers who would be homeless if they broke up with their girlfriends? No, actually, it's not that women are getting those jobs instead:

"But the share of women in the workforce also has decreased significantly since the recession. And the [Council of Economic Advisers] CEA found that less than a quarter of prime-age men who are not in the labor force have a working spouse -- and that number has actually declined over the past 50 years."

So what's up? This is what's up: "Instead, the CEA concludes that the problem is one of education and the erosion of demand for low-skilled workers. ... Blue-collar jobs that were once the cornerstone of the middle class get outsourced or replaced by automation."

In other words, the cutback in investment in infrastructure repair and its resulting jobs is a factor contributing to this problem (trade deals shipping blue-collar jobs out of the country to enrich Wall Street shareholders and corporate executives, of course, being another).

Here's last week's reason to fix the infrastructure. China is surpassing us and this means their economy will boom as ours stagnates. Bloomberg reports on a new study on global infrastructure by the McKinsey Global Institute (MGI), in "China Spends More on Infrastructure Than the U.S. and Europe Combined," calls the U.S. a "big economy with low spending" on infrastructure.

"Economists around the world have been arguing that now is a great time to invest in infrastructure because interest rates are super-low and the global economy could use the spending jolt."

Related Topic(s): Austerity; Economy; Infrastructure; Work, Add Tags
Add to My Group(s)
Go To Commenting
The views expressed herein are the sole responsibility of the author and do not necessarily reflect those of this website or its editors.