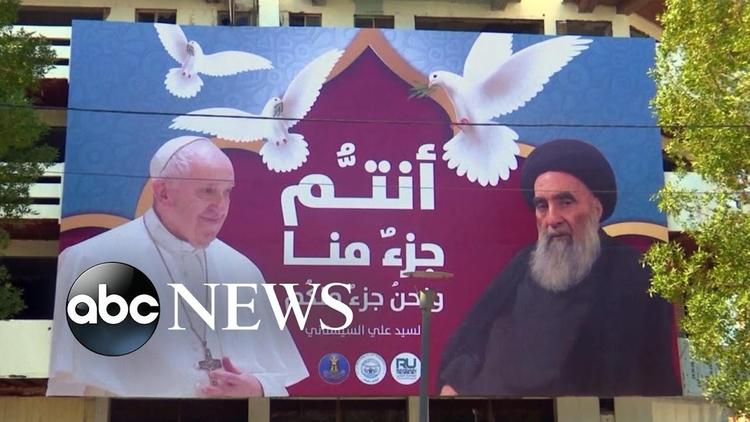 Jazeera reports that Pope Francis began his unprecedented trip to Iraq on Friday, his first visit abroad since the beginning of the pandemic. No pope had ever visited Iraq, though the country once had a significant Christian population. Part of the reason for the pope's visit is to give heart to the dwindling Christian community, which includes Uniate Catholics.

Pope Francis said that he is going to Iraq as a penitential pilgrim, asking God's forgiveness for the years of war and violence that have afflicted Iraq, and as a pilgrim of peace.

The Pope was invited to the country by President Barham Salih, who hoped the pontiff's visit would have a calming effect.

Iraq is now thought to have about 300,000 Christians, some 1 percent of the population. Before the Bush invasion of Iraq in 2003 the number was said to have been 800,000 (and then the Iraqi population was smaller). The US invasion and occupation created a power vacuum in the country that saw the rise of extremist groups. Because Americans were the enemy and Occupier, and are mostly Christian, extremists began targeting Iraqi Christians (whose families had been there for a millennium and a half and who had nothing to do with the United States). Many have fled to Beirut or Detroit. Most remaining Iraqi Christians are Roman Catholics who recognize the Pope but have retained their own Syriac liturgy.

The Pope said that he was sure that the correct teachings of the religions call for holding to the values of peace, brotherhood and humanity. He said on his arrival in Baghdad, "We must concentrate on what unites us rather than what leads to our division." He expressed concern about the pandemic, but said it was an opportunity to think about the pattern of our lives and existence. He urged that the vaccine be distributed in a fair and equitable manner.

He urged Muslims to embrace the Christians in their midst. (Muslims are supposed to do this anyway, since they recognized Christians and Jews as fellow monotheists and "people of the Book" with a divine scripture).

Addressing the violence that has plagued the region in recent decades, Pope Francis denounced the fundamentalism that rejects coexistence as having brought death, destruction, and ruins visible to the eye.

He referred to the travails of the Izadi (Yazidi) Kurds, who were attacked by the ISIL terrorist group, describing what happened to them as headlong barbarism and entire lack of humanity. He deplored the Izadis' potential loss of identity and described cultural and religious diversity as priceless and valuable, not something anyone should strive to end.

He urged rebuilding and striving for a more just world for coming generations. He said respect for rights and safeguarding all the religious communities in the world was necessary to achieve peace and harmony. He added, "enough of violence and extremism." He said God calls us to love, not to displacement and terrorism.

He especially thanked those charitable organizations who are helping to rebuild Iraq and to help the millions of displaced.

Prime Minister Mustafa al-Kadhimi tweeted, "With all love and peace both the Iraqi people and government welcome His Holiness Pope Francis, to emphasize the depth of the human bonds that are and have been historically centered on the lands of Mesopotamia, where religions and intellectual currents and common human values meet. Greetings to His Holiness in the land of Sumer, Babylon, Assyria, and the prophets and saints."

The biblical figure Abraham is said in the Bible to be from Ur in what is now Iraq, and the Pope will visit his supposed birthplace. In the Bible, as well, Jonah was said to have preached in Ninevah in what is now northern Iraq, and the country is the site of one of the earliest Christian communities, which at one time comprised a good deal of the population, under the Sasanian Iranian empire and then under the Muslim caliphates.

President Barham Salih, of Kurdish heritage, hosted the pope in the presidential palace in the high-security Green Zone.

Related Topic(s): Iraqi Government; Iraqis; Isil; Muslim; Pandemic; Pope Francis; Religion, Add Tags
Add to My Group(s)
Go To Commenting
The views expressed herein are the sole responsibility of the author and do not necessarily reflect those of this website or its editors.