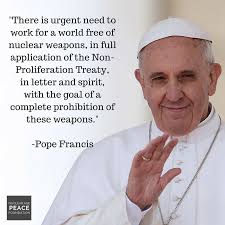 Last weekend, Pope Francis outright condemned the manufacture and possession of nuclear weapons. (I'll bet you didn't notice that in the mainstream media.)

The pope did so during his visit to Hiroshima and Nagasaki, where he met with survivors of the two Japanese cities which were virtually wiped off the map when atomic bombs were dropped on them in 1945. The weapons of unprecedented mass destruction killed more than 200,000 people in matters of minutes.

The pope's visit and sharp condemnation could not come at a more opportune time either historically or liturgically (on this First Sunday of Advent). Historically, they follow hard upon the conviction of the Kings Bay Plowshares 7, a group of seven Catholic peace activists who in April of last year entered the Kings Bay Naval Submarine Base in Georgia to symbolically destroy the nuclear weapons housed there. (Kings Bay harbors at least six nuclear ballistic missile submarines. Each of them carries 20 Trident missiles.)

The Seven included Liz McAlister, the wife of deceased peace activist Phil Berrigan, as well as Martha Hennesy, the granddaughter of Dorothy Day, the legendary co-founder of the Catholic Worker Movement.

As I pointed out a couple of weeks ago, the group's own "weapons" for accomplishing their task were hammers, crime scene tape, and baby bottles containing their own blood. Once inside, they splashed their blood on the walls of the base's administration building. They used their hammers to "destroy" the nosecone of one of the Trident missiles. They also posted a formal indictment of the U.S. government charging it with crimes against peace.

At their trial the activists had planned to mount a "necessity defense." However, the presiding judge forbade them to cite their religious motivations. That nullified their planned argument that their "crime" was morally necessary to prevent the far greater catastrophe of a nuclear war.

The Seven had also planned to present Daniel Ellsberg as an expert witness to articulate that defense. All of us recall Ellsberg as the most famous whistle blower in U.S. history. In 1971, he risked a lifetime behind bars when he leaked the famous Pentagon Papers that revealed Washington's hidden strategy behind the Vietnam War. His recent book The Doomsday Machine: confessions of a nuclear war planner details his work as a Defense Department analyst and nuclear weapons strategist.

However, Ellsberg too was forbidden to testify. Had he done so, he would have argued that the Seven were faithfully following the prophet Isaiah's command to "beat swords into plowshares" (IS 2:4).

(By the way, with the judge's restrictions in place, the Plowshares 7 were convicted of conspiracy. On their sentencing within 90 days, the activists will face more than 20 years in prison.)

All of this -- Pope Francis' words about the sinfulness of nuclear weapons manufacture and possession as well as the conviction of the Plowshares 7 -- is relevant to this Sunday's liturgy of the word and historically relevant in the way just explained. That's because today's first reading contains those words from the prophet Isaiah.

Contradicting his people's earlier understanding of God as a "Man of War," Isaiah speaks words describing divine opposition to all war and a fortiori, of course, to nuclear war. They envision a precisely enlightened human future when the people of the world will "beat their swords into plowshares and their spears into pruning hooks," and where "one nation shall not raise the sword against another."

Then in today's Gospel reading from the 24th chapter of Matthew's Gospel, Jesus (like the Buddha before him) calls his followers to simply wake up rather than prepare for war against their Roman occupiers led by a violent "Son of Man." As Matthew's readers will discover in his 25th chapter, "waking up" means recognizing Christ's presence in the "least of the brethren." Jesus implies that such recognition precludes war of any kind and (again a fortiori) nuclear war.

To get what I mean, please read for yourself today's biblical selections. You can find them here. Despite their obscurity (especially in today's apocalyptic Gospel passage), you'll see that they're about waking up and renunciation of war. At least that's what I see in them, as you can tell from my "translations" immediately below:

Related Topic(s): Buddha; Catholic; Jesus; Militarization; Nagasaki; Nuclear Bombs; Nuclear Disarmament; Nuclear Energy- Weapons; Peace; Pope Francis; (more...) Prophet; Sunday, Add Tags  (less...)
Add to My Group(s)
Go To Commenting
The views expressed herein are the sole responsibility of the author and do not necessarily reflect those of this website or its editors.