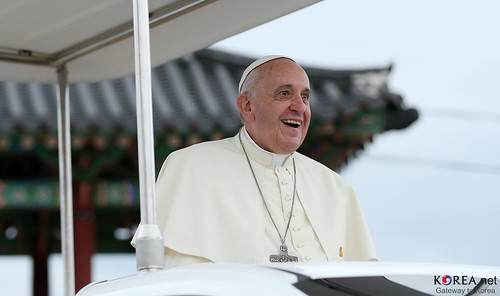 Duluth, Minnesota (OpEdNews) September 29, 2019: The Polish Pope John-Paul II (formerly known as Cardinal Karol Wojtyla, a theater buff as a young man) famously opposed communism in Poland and elsewhere at the same time that the American President Ronald Reagan, a former Hollywood-movie star, also opposed communism on the world stage. Consequently, the Polish pope became a hero to many conservative American Catholics who had grown up with culturally conditioned anti-communism advocated not only by the Roman Catholic Church but also by both major political parties in the United States after World War II.

After the Polish pope's long reign, he died. He was succeeded by the German shepherd Pope Benedict XVI (formerly known as Cardinal Joseph Ratzinger). Together the Pole and the German had strictly silenced what they considered to be Marxist terminology and conceptual thought. Regardless of whatever influence the Christian scriptures and apocalyptic writings may have had on Karl Marx's conceptual thought, both Pope Wojtyla and later Pope Ratzinger considered hints of Marxist thought to represent ideology, not authentic Roman Catholic theology as advanced officially by the bishop of Rome in what is known as the church's magisterium.

For an account of many of those silenced by those two, see Matthew Fox's 2011 book The Pope's War: Why Ratzinger's Secret Crusade Has Imperiled the Church and How It Can Be Saved (New York: Sterling Ethos).

In any event, Pope Benedict XVI convened a synod of bishops to consider the theme of the new evangelization for the transmission of the Christian faith in the Roman Catholic Church. The synod of bishops met October 7-28, 2012. The 2012 synod of bishops was actually the XIII Ordinary General Assembly of the Synod of Bishops in other words, it was part of an ongoing process of assemblies of bishops. In the so-called "hierarchical" governance structure of the Roman Catholic Church, bishops hold a privileged position and the bishop of Rome holds the most privileged position among the bishops.

As a kind of report, the synod bishops in 2012 prepared a list of propositions (or proposals of a sort) to present to the bishop of Rome (also known as the pope) for further elaboration as guidance for the church. Popes routinely issue various kinds of documents for the guidance of the church. Journalists assigned to cover the pope and the Vatican routinely report on such documents.

But then Pope Benedict XVI surprised everybody by abdicating the papacy. He is still alive, but he is no longer the official bishop of Rome, the pope.

Next, the cardinal-electors surprised everybody in 2013 by electing the Argentine Cardinal Jorge Mario Bergoglio to be the new pope, the first Jesuit pope. He took the name Pope Francis in honor of St. Francis of Assisi, the medieval Italian founder of the Franciscan religious order which eventually produced missionaries who were very active in California, where they routinely named certain places after saints (e.g., San Francisco is named after St. Francis of Assisi). Incidentally, the Jesuits also had missionaries who travelled far and wide, including the Jesuit missionaries who went to South America and are commemorated in the 1986 movie The Mission.

In any event, in the first year of his pontificate, Pope Francis took up the task of issuing the apostolic exhortation Evangelii Gaudium (The Joy of the Gospel) about the so-called new evangelization. This document includes 217 end-notes, 30 of which refer to the propositions (or proposals of a sort) advanced by the 2012 synod of bishops that Pope Benedict XVI had convened and two other end-notes reference Benedict's homily at the closing of the synod. In the document itself, quotations from scripture are referenced with in-text parenthetical documentation. Between the quotations from scripture and the references cited in the end-notes, Pope Francis refers to an abundance of sources to support his various claims. Nevertheless, I will use my detective skills to try to detect certain features of the text that may represent the new pope's emphases, including perhaps emphases that have been emphases of previous popes.

Now, Pope Francis operationally defines and explains his conceptual frameworks as theological, not as ideological in short, theology, not ideology.

Related Topic(s): Anti-communism; Bible; Capitalism; Catholic; Charisma; Jesuits; Pope Benedict XVI; Pope Francis; Pope John Paul; Spiritual; (more...) Synod; Theology, Add Tags  (less...)
Add to My Group(s)
Go To Commenting
The views expressed herein are the sole responsibility of the author and do not necessarily reflect those of this website or its editors.