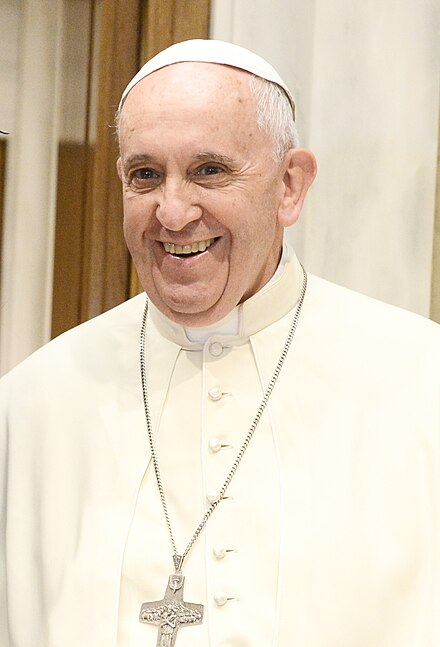 Duluth, Minnesota (OpEdNews) August 30, 2019: In 20/20 hindsight, I now see that I failed to mention one extremely important point about Pope Francis (born in 1936; reigned 2013- ) in my 6,000-word OEN review essay "'Substantialism' in Past Thinking about the Church" (dated August 24, 2019) that the American Jesuit Renaissance specialist and church historian John W. O'Malley (born in 1927; Ph.D. in history, Harvard University, 1966) makes in his important new book When Bishops Meet: An Essay Comparing Trent, Vatican I, and Vatican II (Belknap Press of Harvard University Press, 2019).

To recap briefly, I drew on the thought of the American Jesuit Renaissance specialist and cultural historian Walter J. Ong (1912-2003; Ph. D. in English, Harvard University, 1955) about what he styles "open closure" versus closed-systems thought in his 1977 book Interfaces of the Word: Studies in the Evolution of Consciousness and Culture (Cornell University Press, pages 305-341). In my review essay, I aligned the pre-Vatican II church with closed-systems thought, and I aligned the panegyric (O'Malley's terminology, 2019, pages 28-29) documents of Vatican II with what Ong styles "open closure" "closure" in that the documents delineate norms and values (O'Malley, 2019, pages 28-29); but also "open" in that the panegyric documents call for interacting with the modern world.

O'Malley says, "Every document of the council is in some measure a document about 'the church in the modern world'" (page 164; his emphasis).

Now, this brings me to the important point about Pope Francis that I failed to mention in my review essay. O'Malley-the-church-historian says, "While he was still archbishop of Buenos Aires, Pope Francis entered into an ongoing public [in the presence of a journalist transcribing the] dialogue with Rabbi Abraham Skorka, later published as a book. Never in the entire annals of Christian history had a Catholic prelate ever engaged in such an encounter" (page 199).

The English translation of their joint book is On Heaven and Earth, edited in Spanish by Diego F. Rosemberg, translated by Alejandro Bermudez and Howard Goodman (New York: Images, 2013).

Now, in the 2014 book The Great Reformer: Francis and the Making of a Radical Pope (New York: Henry Holt, pages 324-325), Austen Ivereigh says, "In 2010 [Rabbi] Skorka and [Archbishop] Bergoglio met every month for a year in the company of a journalist who transcribed and edited their discussions on mostly moral and ethical topics."

But that's not the only important thing that Archbishop Bergoglio did in 2010. Ivereigh says, "In October 2010, Archbishop] Bergoglio and [Rabbi] Skorka began taking part in an unusual three-way dialogue broadcast on the archdiocese's TV channel, Canal 21. The chair was Marcelo Figueroa, a Protestant theologian who coordinated what turned out to be thirty-one hour-long monthly programs. Each took a social theme such as solidarity, sexuality, authority, happiness and centered the discussion on the Bible, the book that all three traditions shared and all three men knew deeply" (page 325).

From Archbishop Bergoglio's participation in those different encounters with Rabbi Skorka and a third person in each context, I would say that Pope Francis is personally capable of what Ong styles "open closure."

Moreover, in my estimate, Pope Francis' personal "open closure" is felt by certain traditionalist Catholics such as Steve Bannon, Trump's former advisor, and Ross Douthat, the author of the book To Change the Church: Pope Francis and the Future of Catholicism (New York: Simon & Schuster, 2018), as threatening. They feel threatened by the pope's "open closure" because they are deeply in love with closed-systems thought.

Related Topic(s): Catholic; Catholic Church; Catholicism Vatican Pope; Pope Francis, Add Tags
Add to My Group(s)
Go To Commenting
The views expressed herein are the sole responsibility of the author and do not necessarily reflect those of this website or its editors.