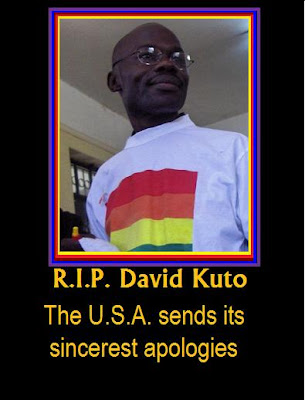 One of my recurring rants about the extreme Religious Right is that whatever demonizing they inculcate into the minds of people, someone is going to get killed. It's happened in the past: the demonizing of GLBT people has resulted in bashings, murders and suicides. They disavow any wrongdoing, of course, going against common knowledge - and common sense - but hiding beneath the glorious cloak of religion, they feel they can get away with most anything. The latest murder simply confirms the extent to which their aspirations in Africa will go: David Kuto was a dreaded "homosexual activist" (the term made pejorative by Family Research Council's Tony Perkins) in Uganda and was one of the people featured in Rolling Stone's* front page expose headlined "Hang Them!"

David Kuto was viciously bludgeoned to death last Wednesday, amidst not only the shock and horror of Uganda's LGBT community, but of the rest of the world. Kuto was also an LGBT human rights activist of some reknown. Ironically, his fame reached its height when his picture was published in that (now infamous) tabloid shot.

The name of David Kuto was known by our own State Department and Hillary Clinton had this to say about the murder:

This crime is a reminder of the heroic generosity of the people who advocate for and defend human rights on behalf of the rest of us -- and the sacrifices they make. And as we reflect on his life, it is also an occasion to reaffirm that human rights apply to everyone, no exceptions, and that the human rights of LGBT individuals cannot be separated from the human rights of all persons....We honor David's legacy by continuing the important work to which he devoted his life.

Secretary of State Hillary Clinton will undoubtedly receive a rhetorical slap in the face by Tony Perkins, who, if memory serves us correctly, enlisted the services of a lobbying group for $25,000 to stop the U.S. Congress from admonishing Uganda for its proposed "Kill the Gays" bill. 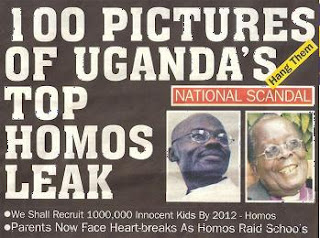 Let the backpedaling and disassociating rhetoric begin**: Scott Lively, co-author of The Pink Swastika has stated repeatedly that he had nothing to do with the "Kill the Gays" bill in Uganda, bemoaning the fact that the bill had a death penalty. However, back in 2009, after his "successful" presentations and lectures in Kampala, Lively exuded hubris about his exploits.

I'm writing from Kampala, Uganda where I am teaching about the "gay" agenda in churches, schools colleges, community groups and in Parliament. My visit here is being treated as an international crisis by the "gay" activists and their media toadies, who are spinning lies in their usual manner, but the Ugandan response has been resoundingly positive ...

He [Stephan Langa - a "ministry partner" in Uganda] said that a respected observer of society in Kampala had told him that our campaign was like a nuclear bomb against the "gay" agenda in Uganda. I pray that this, and the predictions, are true. [emphasis and parentheses mine]

I still want to send them my remaining stock of about 100 or so copies of Seven Steps, but I didn't raise any money toward this in my last appeal. If you would like to help, please make a donation at http://www.defendthefamily.com/help/donate.php.

The "nuclear bomb" phrase has been duly noted by many LGBT rights activists, and for good reason: militaristic rhetoric has permeated the Right for a very long time.  And note that his newsletter post ends in a request for donations to support his work and his writings. Lively's seminal work The Pink Swastika was panned by historians and sales were poor  - until he started to hawk the book through churches and organizations like the Family Research Council and American Family Association. It's still being touted in the Right Wing WorldNetDaily.com by uber-conservative Michel Farah. The Pink Swastika is a small but steady moneymaker Lively is loathe to be rid of.

Rev. Dan Vojir is has been writing/blogging on religion and politics for the better part of ten years. A former radio talk show host (Strictly Books " Talk America Radio Network) and book publisher, Dan has connected with some of the most (more...)
Related Topic(s): Anti-gay; David Kuto; Demonizing; Hillary Clinton; LGBT; Murder; Religious Extremism; Religious Hypocrisy; Religious Right; Rick Warren; (more...) Scott Lively; Tony Perkins, Add Tags  (less...)
Add to My Group(s)
Go To Commenting
The views expressed herein are the sole responsibility of the author and do not necessarily reflect those of this website or its editors.