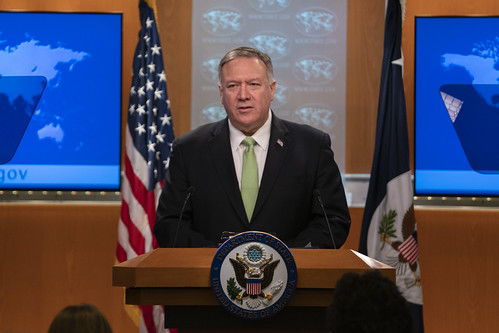 America's "shadow president," Mike Pompeo, has acknowledged that the assassination of Iran's highest-ranking military general, Qassem Soleimani, was part of a broader strategy to restore "real deterrence" by eliminating presumed enemies of the United States. Pompeo's comments at Stanford University's Hoover Institute on January 13, put to rest earlier claims that the Iranian general had been killed to prevent "imminent attacks on U.S. targets." Those claims have since been discredited by independent journalists and mainstream publications that have shown that the assassination was prepared months in advance. In truth, Soleimani was killed to roll back Iran's influence in Iraq and to reverse the effects Washington's catastrophic counterinsurgency operation that removed the mainly Sunni-Baathist party from power creating a vacuum that was filled by Iranian-backed militias. The Solemani assassination was just the latest transgression in a conflict that dates back 17 years.

Pompeo's hand in the assassination is not really in doubt. As the New York Times noted in an article two weeks ago: "Pompeo was the loudest voice in the administration pushing President Trump to kill Iran's most important general." The Times also credits the blustery Pompeo as the "chief architect of the rising tensions between the United States and Iran"..."he is in the unusual role of shaping national security policy." ("Pompeo Upended Middle East by Pushing Trump to Kill Iranian General," New York Times)

Pompeo is the "chief architect" of the administration's failed Iran policy. It was Pompeo who pushed Trump to withdraw from the Iran nuclear deal, and Pompeo who promoted the economic blockade that has strangled the Iranian economy. Pompeo has also been the biggest proponent of Trump's extrajudicial assassination policy whose first notable trophy was Iran's most decorated and revered general, Solemani. The incident has set the Middle East ablaze. Even so, Pompeo has never shown the slightest sign of remorse nor has he offered his condolences to the millions of people across the Middle East who poured out into the streets to mourn the passing of their beloved hero. Their anguish means nothing to Pompeo who believes he is carrying out "God's work" by eliminating anyone who stands in the way of US ambitions in the region.

At the Stanford confab, Pompeo announced that he intends to move ahead with his plan to reestablish "deterrence" to discourage Tehran's "malign activity." Regrettably, Pompeo's grasp of deterrence bears no resemblance to the original political and military doctrine. Traditionally, deterrence is a strategy "under which one power uses the threat of reprisal effectively to preclude an attack from an adversary power." In practice this means that Country A will build up its nuclear arsenal with the intention of "deterring" Country B from launching an attack. The strategy is aimed at preserving the peace and avoiding unnecessary bloodshed. Pompeo's interpretation of deterrence is aimed at liquidating the enemy not deterring him. It is a form of aggression that bears no resemblance to the original military doctrine. Here's more from Reuters:.

"President Trump and those of us in his national security team are re-establishing deterrence, real deterrence ... against the Islamic Republic of Iran," he said. "Your adversary must understand not only that you have the capacity to impose cost but that you're in fact willing to do so," Pompeo added." ("Pompeo says Soleimani killing part of new strategy to deter U.S. foes," Reuters)

Once again, Pompeo is twisting words to confuse his audience. Sure, it's true that "Your adversary must understand not only that you have the capacity to impose cost but that you're in fact willing to do so." But it's also true that the goal of deterrence is to deter the enemy from engaging in hostilities to begin with. That is the polar-opposite of killing the enemy. Pompeo appears to be stuck on this point.

In any event, a gangland-style hit that is illegal under US statutes and international law is not an example of deterrence. It's barbarism masquerading as foreign policy doctrine. Pompeo knows that, just like he knows that targeted assassinations are powerful provocations that lead to over-reaction, tit-for-tat retaliation, and eventually a full-blown region-wide conflagration. Which seems to be the point. Pompeo wants to confront Iran in the one area in which the US excels, war. Why else would he kill Iran's most admired leader?

"We saw, not just in Iran, but in other places, too, where American deterrence was weak. We watched Russia's 2014 occupation of the Crimea and support for aggression against Ukraine because deterrence had been undermined. We have resumed lethal support to the Ukrainian military.

"China's island building, too, in the South China Sea, and its brazen attempts to coerce American allies undermined deterrence. The Trump administration has ramped up naval exercises in the South China Sea, alongside our allies and friends and partners throughout the region." ("The Restoration of Deterrence: The Iranian Example", US Embassy and Consulates)

Now we're getting down to brass tacks. This isn't about Soleimani at all. It's about the long list of foreign policy challenges the US now faces as new centers of power emerge (primarily Russia and China) putting more pressure on the post-WW2 "liberal" world order and hastening the decline of an aging hegemon who is fast losing its grip on global power. That is why Pompeo is invoking a new and more vicious foreign policy. Washington power-brokers seem to believe that they need to take more reckless and violent measures to reverse present trends that are steadily eroding US power, clearing the way for an emerging multi-polar world order. Taking these things into account, the Soleimani assassination can be seen for what it really is, a desperate attempt to turn back the clock to the early 1990's following the dissolution of the Soviet Union when America ruled supreme and think-tank pundits proudly boasted of the "end of history" and the beginning of a glorious "American Century," none of which has worked out according to plan.

"The importance of deterrence isn't confined to Iran," Pompeo said. "In all cases, we must deter foes to defend freedom. That's the whole point of President Trump's work to make our military the strongest it's ever been." (Reuters)

Pompeo wants a stronger and most costly military. He wants to use all the tools at his disposal to maintain Washington's dominant position in the world, especially the instruments of coercion that can used to force rivals to comply with Washington's diktats. And, he has invoked a new doctrine, The Pompeo Doctrine, to provide ideological cover for the anticipated bloody assault on foreign leaders and dignitaries. So far, no one has challenged Pompeo's alarming policy-shift. There appears to be consensus among elites that the only way to arrest America's relentless decline is by escalating the hostilities, intensifying the violence and widening the wars.

Pompeo's announcement puts the country on a path to bigger and bloodier confrontations but, as yet, no one has lifted their voice in opposition.

Related Topic(s): Deterrence; Hostilities; Iran; Soleimani; Strategy; Violence, Add Tags
Add to My Group(s)
Go To Commenting
The views expressed herein are the sole responsibility of the author and do not necessarily reflect those of this website or its editors.