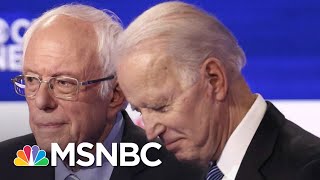 The job of the next president of the United States is to restore a sense of competency, decency and dignity to the office. Nothing is more important than that.

I actually wrote those words about three weeks ago as I worked on a reaction to developments in the Democratic presidential race and various complaints being voiced about the front runners too old, too radical, too conservative, too male, etc.

COVID-19, unfortunately, intervened. It also reinforced my belief in that simple campaign slogan: competency, decency, dignity. Put any Democrat's name in front of it:

As swiftly as Covid-19 moved through parts of the population, just as swiftly do political stories change. Sanders dropped out and pledged to support Biden just as I was rewriting for Covid. Cuomo burst on the scene just as abruptly, reminding Americans that it is important to have elected officials who are capable, competent and concerned about people's welfare. Actually, their lives.

Cuomo's father, Mario, also a New York governor, once wrestled with the notion of running for president to the point he was dubbed "Hamlet on the Hudson" to run or not to run. He decided not to at the last moment. Andrew has insisted repeatedly he is not looking to be president.

Not yet. He's also a friend of Biden's. But Democrats can at least rest assured that if something else unforeseen happens between now and their nominating convention in August, they've got Bernie and Andrew in the bullpen. Elizabeth Warren, too.

But the real need now is for Democrats to present, not just a familiar, comfortable name for president, but a super team, if you will, of potential cabinet members and presidential advisors who will reinforce the need to return competency, decency and dignity in the Oval Office.

The need for competency has been apparent from the first days of the Trump presidency. The administration's unconscionably inept response to the Covid-19 virus is the predictable result of three-plus years of looking the other way, justifying and making excuses for Trump, a man with no moral compass or sense of responsibility and who is incredibly dumb to boot. His dismissive attitude to doctors and scientists on the handling of the virus has resulted in chaos, fear, panic, a probable recession and death. There is no excusing this arrogant incompetence.

In the category of decency and dignity, I include a respect for the truth as well as the Constitution. I also include an understanding of this nation's once respected role as the leading voice for freedom and democracy on the planet a nation represented by the Statue of Liberty, not by an egomaniac's wall and caged migrant children,

Regarding the nay-sayers among Democrats " Joe Biden and Bernie Sanders are both 78 years old. I am 78 years old. If you wanted to dig into my past life and drag out every stupid, profane, dumb, selfish, hurtful thing I have ever said or done, a lot of people probably would say, no, I don't want him to be president.

Given that, I still say without hesitation and in all humility, that I believe I would make a much better president than Donald Trump has been (as would a lot of you). That's because I think I have learned, sometimes the hard way and with age, what is important and what is not so important. I don't think I'm smarter than trained professionals. And I have a respect for the truth as well as the history of this nation. If you want references, I can probably pick some up.

But I'm not running for president. Joe Biden is and, until recently, Bernie Sanders was. (Cuomo still says he's out.) While I can agree and disagree with both men on a variety of issues, I have no doubt that either one would honor the tradition of the office and work immediately from day one to remove the stain that has been Donald Trump. I can say that about every one of the Democratic presidential candidates.