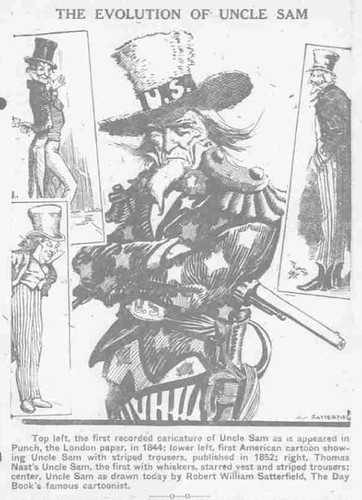 A century ago newspapers employed more than 2,000 full-time editorial cartoonists. Today there are fewer than 25. In the United States, political cartooning as we know it is dead. If you draw editorial cartoons for a living and you have any brains you're working in a different field or looking for an exit.

You can still find them online so political cartoons aren't yet extinct. But they are doomed. Most of my colleagues are older than me (I'm 55). As long as there are people, words and images will be combined to comment on current affairs. But the graphic commentators of tomorrow will be ad hoc amateurs rather than professionals. They won't have the income and thus the time to flesh out their creative visions into work that fulfills the medium's potential, much less evolves into a new genre.

With zero youngsters coming up in the ranks and many of the most interesting artists purged, our small numbers and lack of stylistic diversity has left us as critically endangered as the wild cheetah. The death spiral is well underway.

January 2019: Steve Benson, the widely-syndicated winner of the Pulitzer Prize, was fired by the Arizona Republic after three decades of service.

May 2019: Gatehouse Media fired three cartoonists on the same day: Nate Beeler of the Columbus Dispatch, Rick McKee at the Augusta Chronicle and Mark Streeter at the Savannah Morning News.

June 2019: In one of the strangest offings, the New York Times fired both of its cartoonists, Heng and Patrick Chappatte, in order to quell criticism over a syndicated cartoon -- one drawn by an entirely different cartoonist. The Syrian government thugs who smashed Ali Ferzat's hands with a hammer in 2011 were more reasonable than editorial page editor James Bennet; the goons only went after the actual cartoonist whose cartoons offended President Bashar Assad. Nor, by the way, did the Syrian dictator ban all cartoons. Political cartooning is now and forever banned from the 100%-censored Times.

And of course in 2015, the Los Angeles Times, whose parent company had recently been purchased by the Los Angeles Police Department pension fund, fired me as a favor to a prickly police chief because he was angry at my cartoons. In 2018 the same paper fired cartoonist David Horsey for the crime of accurately describing White House press flak Sarah Huckabee Sanders' looks as those of a "slightly chunky soccer mom." As at a Stalin-era show trial, they forced Horsey to apologize before giving him the boot.

Individual cartoonists are under fire around the world. Only in the United States, "land of the free," has the art form as a whole been targeted for systematic destruction by ruling elites and cultural gatekeepers. After decades of relentless, sweeping and never-reversed cutbacks there are now far more political cartoonists in Iran than in the United States. After terrorists murdered 12 people at Charlie Hebdo, a single publication in France, hundreds of U.S. newspapers ran editorials celebrating the power of cartoons; 99% of these hypocritical blowhards didn't employ a single cartoonist.

Here's how it happened/it's happening:

Cartoonists were over-represented in mass layoffs. Publishers fired numerous journalists. But they always came first for the cartoonists.

Publishers killed the farm system. The early 1990s marked the start of a vibrant new wave of "altie" political art by Generation Xers. Urban free weeklies carried our work but deep-pocketed dailies and magazines refused to hire us. Gifted young cartoonists realized they'd never be hired and abandoned the profession.

Related Topic(s): Cartoons; Fired; Newspapers; Political Art; Political Journalism, Add Tags
Add to My Group(s)
Go To Commenting
The views expressed herein are the sole responsibility of the author and do not necessarily reflect those of this website or its editors.