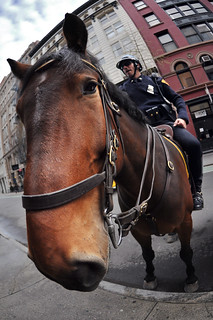 It's not surprising when Ed Mullins leaps to the defense of police officers accused of murder or other criminal abuses. After all, he's president of the Sergeants Benevolent Association, a New York City police union. Protecting cops is his job.

In a July 14 column for the New York Post, Mullins decries the city's $5.9 million settlement with the family of Eric Garner, who died at the hands -- literally, from a "chokehold" -- of officer Daniel Pantaleo. The settlement, wrote Mullins, is "obscene."

I agree with Mullins. It IS obscene. The taxpayers of New York City should never have been forced to compensate Garner's family for his death. Those taxpayers didn't kill Eric Garner. Daniel Pantaleo did.

Of course, Mullins wouldn't agree with how I put that. He doesn't call the settlement obscene because he wants Pantaleo to pay. He objects because taxpayer money paid to Pantaleo's victims can't be paid to members of the Sergeants Benevolent Association.

Still, I have to credit Mullins with inspiring my proposal for consideration by his association, by New York City, and by police unions and city governments everywhere: Insurance.

Yes, insurance. Cities should require every police officer in their employ to carry a $10 million liability policy for torts inflicted while on duty. Prosecuting cops for crimes committed in uniform is always a dicey proposition, but there's no reason the civil end can't work like any other insurance situation. There's a claim. If it's denied, there's a lawsuit, a verdict or a settlement, and the insurer coughs up any damages instead of sticking the taxpayers with the check.

With unionized departments, of course, the insurance requirement will have to be negotiated into the labor contract. As will a clause making uninsurable cops subject to immediate dismissal from the force and ejection from the union.

If that sounds like a bitter pill for an Ed Mullins to swallow, here's the sugar coating: There's no reason the unions can't provide the insurance policies themselves: Collect the premiums as part of each member's union dues and set them aside in trust for rainy days when claims get paid. Eventually -- if the actuaries get it right -- profits will flow into the union's general fund. That prospect should warm any union president's heart.

An insurance scheme of this kind will also incentivize the thin blue line to police its own. If insurance premiums go up, cops and union reps will know which comrades to have a "come to Jesus" talk with.

Related Topic(s): Eric Garner; Police; Police; Police Abuse Of Power; Police Brutality; Police Corruption; Police Culture, Add Tags
Add to My Group(s)
Go To Commenting
The views expressed herein are the sole responsibility of the author and do not necessarily reflect those of this website or its editors.