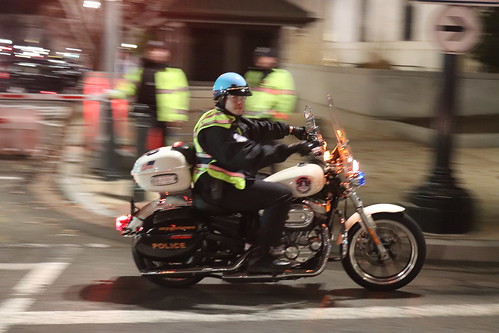 There are two major differences between police officers and other workers in both the private and public sector. The first is a truncated sense of solidarity, the second a lack of accountability. Unionized workers in both the public and private sectors feel a strong sense of identity with each other. Perhaps the greatest infraction a union member can commit is to cross the picket line of another union.

The solidarity of police officers is generally an internal solidarity, which does not extend to other unions. At times, this runs against the interests of civilians they encounter and against the legitimacy of the state. An example is the "blue code of silence," meaning that officers will not report the abuses of other officers. And, in too many cases, officers lie about the conduct of fellow officers and their own conduct. Innocent people have been framed by this lack of honesty. Other unionists do not have this kind of power over people, nor codes of silence that are similar to the Mafia brotherhood. A better norm for the police would be that taught by the military academies--if you see something wrong, report it..

The general lack of police solidarity with other workers has been seen historically in police strike-breaking activity, and also in the violent suppression of the protests of other workers. Two examples are particularly worthy of note. One is the violent suppression of protests by trade unionists, environmentalists, and other anti-free-trade groups in 1999 against the World Trade Organization in Seattle. The police used pepper spray and beanbag projectiles to disperse peaceful protests. The second instance is the police use of rubber bullets and pepper spray to break up peaceful union demonstrations against the 2003 meetings in Miami trying (ultimately unsuccessfully) to establish the Free Trade Area of the Americas. George Sweeney, the president of the AFL-CIO, the national federation to which most of organized labor in the US belongs, denounced these police actions, particularly since the AFL-CIO had taken the lead in negotiating with the police before the protests. In a broader understanding, the police have been the violent domestic enforcers of the neoliberal, workers-be-damned order.

The largest police "union" is the Fraternal Order of Police. It has no relations with the AFL-CIO. However, one much smaller national police union, the International Union of Police Associations (IUPA), does affiliate with the AFL-CIO. And some local police forces affiliate with other unions that have nothing to do with policing, like the food workers, communications workers, or service workers.

On the one hand, the fact that there are police officer unions in the AFL-CIO presents a problem of solidarity. Calls for the AFL-CIO to expel its police officers cannot be accepted without breaking a bond of solidarity. Moreover, the number and percentage of unionized workers overall has shrunk dramatically, particularly since Ronald Reagan declared war on organized labor. The AFL-CIO does not relish the idea of lowering their membership even more. On top of that, the AFL-CIO does not want to play into the right-wing animosity toward all unions. On the other hand, aside from the principle involved, many of its service and public sector members are African American, so it cannot just sit back in silence when faced with the reality of brutally excessive police force directed against African Americans.

So, beginning in 2003, the organization issued calls for police reform. Among them were calls for an end to racial profiling, a ban on chokeholds, expanded use of body cameras, limiting no-knock warrants, and demilitarization of the police. Most recently, it called for the resignation of the police chief in Minneapolis after the murder of George Floyd.

The Police and Accountability

When solidarity is so corrupted, as in lying to protect a fellow brutal officer, it works against accountability, and against the civil rights of the most powerless and vulnerable among us, especially African Americans. If a police chief, a mayor, a review board, a state's attorney, or a jury has to choose between believing an officer and his or her colleagues or believing a victim of police violence, the tendency is to believe the officer. Too many people are in prison either because of this tendency or because innocent people accept a plea deal rather than risk a heavier penalty based on false police testimony that a prosecutor and jury might well accept.

But there are also structural impediments working against accountability and the disciplining of police officers.

First, there is the lack of nonofficial public input into the process by which officers can be disciplined. Some municipalities have adopted civilian review boards. But they usually have restricted access to information in the police files, and most cannot subpoena the officers to testify before them. Such powers are strongly opposed by police unions.

Second, because police officers cannot strike, punitive decisions by a police chief are often taken by the union to arbitration. There are two problems here. First, the police can refuse to accept an arbitrator who, they believe, has been overly harsh with police officers. So arbitrators need to be careful how they treat the police if they want to be paid for more assignments. Second, if there is a history of leniency toward the police in arbitration, then arbitrators will use that leniency as a precedent not to be broken in subsequent cases by the issuance of harsher penalties that might well be warranted. This makes it virtually impossible for police chiefs to fire brutal officers on their force.

Third, the close dependency relationship that is forged between state's attorneys and the police discourages the former from charging the police with crimes, and if they do, they are usually significantly less serious charges than would be made against a civilian. (I refer the reader to my article in the Summer 2020 issue of the Public i , publici.ucimc.org, to see the record of the state's attorney in my own Champaign County, Illinois in going very soft on police officers who have committed crimes).

In addition to all of the above, police unions have proved to be among the most effective lobbyists. They contribute to the campaign funds of politicians of both parties, but are now especially inclined toward "law and order" Republicans. We are seeing that today in their quiet attempts to kill significant proposed changes to American policing. Unlike the past, in the present charged climate they feel that they must give just a tiny bit to ward off any meaningful systemic change in American policing practices.

Some critical, but not exclusive, structural changes are needed in policing:

Municipal police contracts should deal only with wages and working conditions, but not discipline. That should be a matter of city policy. Certainly, due process in disciplinary processes must be maintained.

Belden Fields is a Professor Emeritus of Political Science at the University of Illinois in Urbana and an editor/facilitator/writer for the Public i, the newspaper of the Urbana-Champaign Independent Center. His scholarly work has focused on French (more...)
Related Topic(s): Anti-union; Arbitration; Police; Police; Police Abuse Of Power; Police Brutality; Police Brutality Paul Schene; Police Monitoring; Police Reform; Prosecutor, Add Tags
Add to My Group(s)
Go To Commenting
The views expressed herein are the sole responsibility of the author and do not necessarily reflect those of this website or its editors.

The French Can Teach Us Something About Health Insurance

The French Left and the European Elections

The 1968 Student Revolt in France: A Fifty Year Retrospective

A Letter to Friends in France after Being Trumped