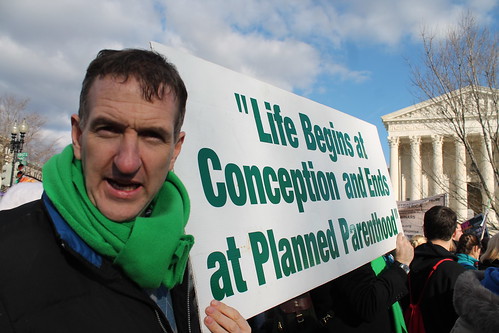 Just like the rest of us, they get up in the morning and go to work. What makes them different is the job they do. It's dangerous. They know that when they kiss their loved ones goodbye that it could possibly be their last kiss as there are people out there that are determined to get them - people that are violent and ready to act. Yet they go to work just the same, day in and day out. Why? Because they are needed and people depend on them. And they will not be cowed by bullies willing to shed blood to achieve their nefarious aims. They truly are modern day heroes that deserve our respect and homage.


Yes, it's a shame that health-care workers have to put their lives on the
line in order to provide medical services that people need and have a right to.


Just like those in law enforcement that are targeted by miscreants and
sociopaths, staffs at facilities that provide legal medical services have to be on guard for an ambush or a sniper with a long gun or worse. These days, like cops, they are in the crosshairs.

The recent tragedy in Dallas that took the lives of five individuals that
were serving and protecting is an outrage. No sane person could condone such a thing and no decent person could encourage such vile behavior toward innocent human beings. The same can said of the killings at a Denver Planned Parenthood clinic last year. Both are the result of a deranged individual that was deluded into thinking that doing evil was a virtuous act of benevolence. And we are left to wonder how these maniacal zealots could be so dangerously mistaken. Or were they misguided?

In the case of the Dallas incident, according to some on the right, it was the direct result of the actions and rhetoric of Black Lives Matter and liberals in general. One right wing pundit even went as far as branding elected officials (New York Mayor Bill de Blasio and Minnesota Governor Mark Dayton) as co-conspirators. Yet, these same finger pointers maintained relaxed digits regarding the tragedy in Denver as if those that commit heinous acts for black lives conspire where those who do so in the name of God (radical Christians in this case -- and why aren't we calling them what they are?) act alone.


It's true that overheated bombast can have catastrophic consequences and those that engage in it bear some responsibility for calamitous results. But that truism applies to all, regardless of dogma or level of self righteousness.


Those that selectively accuse, based on agenda, are not fair and balanced -- they are hypocritical. And if BLM and those that are sympathetic to its cause are responsible for the Dallas tragedy then so to are groups like the National Right To Life organization and their members responsible for the murders in Denver -- including Marsha Blackburn and her cohorts in Congress. More so, in fact, considering that BLM can justify their protests and outright anger with valid video evidence whereas Ms. Blackburn and her comrades have only a work of fiction concocted from illegally obtained snippets spliced and edited, designed to distort reality to offer up as "evidence".

All lives do truly matter -- that includes those pulled over for driving
while black as well as police officers and healthcare workers. And those that point biased fingers would do well to consider the direction in which their other digits are pointed.

I am a working man without a college degree. I write as a hobby and have been published in the Washington Post and Washington Times
Related Topic(s): Evidence; Murder; Police; Reality, Add Tags
Add to My Group(s)
Go To Commenting
The views expressed herein are the sole responsibility of the author and do not necessarily reflect those of this website or its editors.

The Music These Days