We have met the enemy...
(Image by Thad Zajdowicz)   Details   DMCA

"We have met the enemy and he is us." Pogo

Everything is based on winners and losers. To have winners you must have losers.

To get to Heaven requires suffering -- followed by paradise or more suffering.

It is a system that fosters neurosis and mediocrity. Constantly struggling for success, always conscious of failure, the majority look for safety and most of the time never fulfill their potential or find true happiness. Constantly seeking safety, so as to lessen suffering for oneself and loved ones, allows for various neurosis to follow close behind. Consequently many, many talented, sincere individuals never rise to the top and a disproportionate number of sociopaths/psychopaths become successful: narcissists, bullies, etc. with no fear of failure -- they are the kings and queens.

Donald Trump is the ultimate example of a rank narcissist rising to the top. This country is ripe with others of much better temperament, intellect and motive for the office of President. Yet these possible leaders are not stepping up. The voters are not stepping up. Much of America appears to be disgusted with itself -- sitting disconnected, ambivalent -- surrounded by a dubious bounty and not willing to engage in the conversation.

There has been a bunch of talk about Trump being a win/lose kind of guy, as if this makes him somehow different. What makes him different is that he is absolutely a one-trick pony and the one-dimensionality of his personality is on full display; it's rough and it's unapologetic. He is the poster child for an overwhelming amount of American culture. He is the avatar for much of American business, politics, sports, entertainment, religious discourse and advertising. He is the seedy side of unfettered American capitalism made flesh. He is the hero, the champion; spawned, crowned and denied by proud/neurotic/ambivalent citizens.

Mr. Trump is soon to be the national wielder of the public switch. He will attempt to punish us that he deems failures. He will reward those that he classifies as successes. His yardstick will truly be America's yardstick. His rubric will be the tenets of American capitalism. 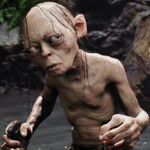 Trump is the American Gollum or Golem. He is the woeful creation. To stop him is to pull from him what animates him. He will have a cadre of motivated minions and sycophants that will relentlessly try to shield him, explain him and fight for him. These folks and his slowly dwindling constituency are his lifeblood. The man alone truly is Gollum, with his sputtering, circular speech and his worship of shiny things. He is a man of clay as are most of his policy pronouncements. The only effective, creative way to combat him is by organizing and being a counterbalance, foil to his support system.

This piece was instigated by a conversation I have been having with a local friend about the looming Trump presidency. He is horrified, truly disturbed. We live in Texas -- deep in Trump territory. From our vantage point is very easy for one to become despondent, horrified. We know we should be doing something. We haven't figured out exactly what that is yet. Because of our age and our creative bents we're thinking in terms of something like the yippie/anti-war movement of the Vietnam era -- wouldn't widespread. Intelligent, message driven anti-Trump street theatre be great right now? I think 'we're not all bozos on this bus'.

This man needs to be rhetorically and politically squished like a bug and we can do it. The United States of America has very big feet.

Related Topic(s): Capitalism; Democracy; Donald Trump; Golem; Presidency; Success; Suffering, Add Tags
Add to My Group(s)
Go To Commenting
The views expressed herein are the sole responsibility of the author and do not necessarily reflect those of this website or its editors.