The Ohio governor should answer his fellow contenders by saying: "You ever heard of anything so crazy?" 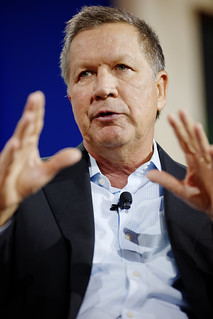 The third Republican debate would draw a lot more viewers if CNBC had selected Mad Money host and Squawk on the Street co-host Jim Cramer as a moderator. He could have shouted, "Risky!" "Don't Buy!" and "Sell!" in response to each and every absurd answer.

But viewership will still be strong, as the candidates have created plenty of their own drama.

Carson arrives on the debate stage with a claim on more of the spotlight and, presumably, the prospect of more scrutiny regarding his most outrageous positions and statements (he proposes to abolish Medicare and says a Muslim president would "have to reject the tenets of Islam").

Then there is Jeb Bush, the former front-runner who is now is such dire straits that his campaign is cutting salaries and cutting back its focus to critical first-caucus and -primary states. If Bush does not deliver the performance of his life tonight, this could be his last debate -- or, at the least, his last debate on the main stage rather than at the kids' table to which credible-but-not-gonna-happen candidates such as Senator Lindsey Graham, R-South Carolina, find themselves relegated. (Of the undercard experience, Graham says, "I think it sucks.")

For the most part, however, Trump, Carson, and Bush will be playing politics as usual -- trying to deliver memorable lines, zinging opponents, delivering canned speeches in the time allotted and hoping to keep or gain traction.

The best prospect for a genuine break from routine is that Ohio Governor John Kasich might do what Democrats, independents, and reasonable Republicans think should have been done long ago: call his fellow Republicans out.

Related Topic(s): Craziness; Debate; John Kasich; Republican, Add Tags
Add to My Group(s)
Go To Commenting
The views expressed herein are the sole responsibility of the author and do not necessarily reflect those of this website or its editors.