The human race discards 200 million metric tons of plastic every year on a global scale. And for a non-biodegradable substance which poisons our food chain, along with adversely affecting the welfare, safety, and food supplies of the world's wildlife, this plastic pollution cannot continue.

Every little tidbit of plastic that was ever created still exists, in some shape or form. Even if it is burned, it normally melts into a melted form - of plastic, no less.

Trying to get rid of plastic by incineration may ultimately lead to less of the plastic on land, but the same amount of plastic still exists. The extra portion has been turned into a toxic mixture of smoke that pollutes the air. Some estimate that plastic may break down and be safely decomposed into the earth over the span of 1,000 years, but nobody really knows. The millennia of safe plastic breakdown and saturation has not passed yet. Whether or not plastic is biodegradable remains an enigma. But if it is, it will take a very long time for the process to play out, this much is certain.

According to the Plastic Disclosure Project: About 33% of plastic is for single use, and then is thrown away. Approximately 85% of the plastic used on the planet is not recycled.

Plastic has the potential to stay in the environment for hundreds, perhaps even thousands, of years. Some scientists even believe that it may last forever. And plastic negatively impacts over 700 species of animals and birds, including humans. 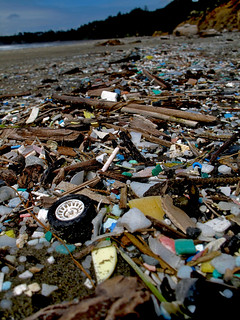 An ugly scene that is entirely manmade: A beach invasion of garbage, and much of it is plastic.
(Image by Jason Karn)   Details   DMCA

Single-use plastic has become an environmental curse. Styrofoam coffee cups, plastic grocery bags, discarded containers used in packaging a myriad of consumer goods, and even the filters of cigarettes inevitably end up laying in the bowels of landfill dumps. Plastic doesn't break down, even though the weight of being buried under other refuse, soil, and rock may cause the plastic to be compacted and take up less space. Simply put, plastic is a material that the earth just cannot digest.

Although many may be under the false notion that most plastic ultimately ends up in landfills, this is not the case. Much of it ends up in the world's oceans. The Great Pacific Garbage Patch, as it is called, is more akin to a soupy mix, mostly made of plastic, with the cocktail primarily found in the northern Pacific Ocean. This messy trash heap floats around in the North Pacific Subtropical Gyre, which is a slowly moving, clockwise spiral of currents created by a high-pressure system of air currents. The area is an oceanic desert that is full of zillions of tiny phytoplankton but few big fish or mammals. Commercial and recreational fishermen and sailors rarely travel through the gyre. But this part of the Pacific is heavily laden with something besides plankton: and that substance is trash, millions of pounds of it, and most of this garbage is plastic.

The two patches are interconnected by a 6,000-mile long current, the Subtropical Convergence Zone, and the relatively thin current, too, is polluted with manmade refuse - and the majority of this junk is plastic.

"It's a big problem," Rob Moir, director of the Ocean River Institute in Cambridge, Mass., told this writer on Monday, July 6. "The dilemma is that plastic gets entangled around marine life and can do great harm. For example, sea turtles are choking on plastic bags. Both turtles and whales are getting ensnared in plastic fishing lines."

"The second big problem is that plastic breaks down in smaller bits in the ocean and sea birds, like albatrosses, are starving. They spend most of their time on the ocean and only come to shore to nest. So they're eating this plastic and they become filled with it and die. They're being found dead in their nests," Moir said.

The fact that plastic floats on the surface of a body of water makes it a danger to any marine life that interacts on an ocean's surface - like sea birds, turtles, dolphins, and whales, he said.

"But there is some good news. The oceans have gyres, and the plastic is accumulating in these gyres. And these gyres are located way out in the middle of the ocean in faraway places. It's not where most of the fish are - I would not eat bluefin tuna or swordfish, since these big fish like to stay in the middle of the ocean. There is a chance they could be affected by plastic pollution. Smaller fish are closer to shore and are safer to eat. Fish like yellow fin tuna, which are on a lower trophic level than bluefin tuna, which are on top of the trophic scale," he said.

"The less expensive the fish, the safer they are to eat," Moir told me.

The problem with the huge garbage dump in the middle of the Pacific is that it lays in international waters and no country is going to claim responsibility for this mess and clean it up, he said.