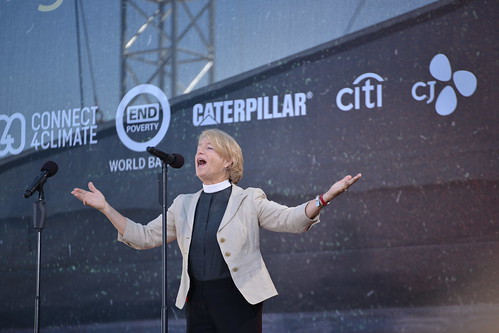 Global Citizen 2015 Earth Day
(Image by SPakhrin)   Details   DMCA
The dark documentary Planet of the Humans, produced by Michael Moore and directed by Jeff Gibbs, is very controversial. It questions the honesty of many banner claims of the climate change movement and is pessimistic about the prospect of averting the worst impacts of global warming. Although the film has flaws, it deserves to be seen with an open but critical mind.

The film's worst flaws are that too much of its information and many of its images are dated and its evidence is anecdotal. For example, there is a clip of Gibbs visiting GM's official premiere of the Chevy Volt in 2010. The car was a plug-in hybrid powered by an internal combustion engine and an electric motor that is rechargeable from a plug-in apparatus. Gibbs gets the GM representative to admit that the electricity in the charging apparatus comes from the municipal grid which is powered by coal (though we learn that the utility will soon convert to cleaner burning natural gas).

Gibbs is implying that, although the Volt itself uses less fossil fuel than ordinary cars, that's only because it draws on fossil fuel consumed by the city's power plant when the battery charges. He implies that the apparent eco-friendliness of the Volt's electric power is an illusion and, more broadly, that the batteries of electric vehicles won't help reduce global warming.

As a Feb. 14, 2020 blog of the Union of Concerned Scientists makes clear, this message is inaccurate. They measured all the emissions caused by electric vs gasoline cars. For the latter, they considered "emissions from extracting crude oil from the ground, moving the oil to a refinery, making gasoline and transporting gasoline to filling stations, in addition to combustion emissions from the tailpipe." For electric vehicles (EVs), they looked at "both power plant emissions and emissions from the production of coal, natural gas and other fuels power plants use."

They concluded that, thanks to improving EV technology and a decline in the use of coal for power plants over the last ten years, EVs are now much cleaner than gasoline cars. For instance, the Tesla Model 3 has "less than a fifth of the global warming emissions of the average new gasoline car." This is a real achievement. So are the efficiency increases in solar and wind technology over the last ten years. Improvements in efficiency let us do more with less (or less with even less) energy and other scarce resources. Will these advances be enough, in the crucial decade ahead, to save us from a climate catastrophe? The film says no, but insufficient evidence to support its thesis.

The film is very good at calling out the dishonesty in corporate greenwashing. For instance, Gibbs visits the concert site of the Global Citizen 2015 Earth Day on the National Mall. A crowd of 300,000 (with 2 million more on YouTube) is watching musical acts interspersed with exhortations from world leaders such as the UN Secretary General. They appear against a backdrop emblazoned with corporate logos such as CITI, Toyota, Caterpillar and iHeart (the right-wing communications giant). Dennis Hayes, the founder of Earth Day, triumphantly proclaims that they have "powered the whole event with solar energy." When Gibbs brings his camera behind the concert stage, we see a token array of solar panels but are told by the installer that the main source of power is a diesel generator.

What does Planet of the Humans say about our prospects? Throughout the film there is a dismissive attitude toward renewable energy technology. At the end, Gibbs says solemnly that "We must accept that our human presence is already far beyond sustainability and all that implies." We must produce and consume less and accept that we have greatly overpopulated the planet. The part about producing and consuming less is radical enough. But it is paired with a need to shrink the human population. What could that mean? Should the prosperous nations of the first world see themselves as lifeboats from which the teeming billions of the third world should be excluded, lest the boats sink? Should we hope that the coronavirus will finish off many more of them than of us?

The film's techno-pessimism is contradicted by the consensus of climate scientists as reflected in a statement published in the journal Bioscience (January, 2020). This statement is every bit as alarmist as the film, but it embraces renewable energy as part of a fix. It begins with this declaration:

"Scientists have a moral obligation to clearly warn humanity of any catastrophic threat and to 'tell it like it is.' On the basis of this obligation . . . we declare, with more than 11,000 scientist signatories from around the world, clearly and unequivocally that planet Earth is facing a climate emergency."

They recommend an all-out effort to implement the advances in renewable energy technology, protecting and restoring Earth's ecosystems (especially its forests), growing and eating mostly plant-based foods, abandoning the capitalist religion of growth, prioritizing basic needs and reducing inequality, and gradually reducing world population "within a framework that ensures social integrity." This framework would include making "family-planning services available to all people, remov[ing] barriers to their access and achiev[ing] full gender equity, including primary and secondary education as a global norm for all, especially girls and young women."

Apart from reliance on renewable energy technology, the film would agree with all these recommendations even though it doesn't go into detail. The climate scientists speak as if what they recommend is doable somehow. And they "stand ready to assist decision-makers in a just transition to a sustainable and equitable future." Good luck on that!

The good news is that the U.S. Energy Information Administration predicts that "renewables will provide nearly half of world electricity by 2050." The bad news is that it also predicts a "nearly 50% increase in world energy usage by 2050, led by growth in Asia" and steadily increasing CO2 emissions through 2050.

Related Topic(s): Climate Change; Climate Change Costs; Climate Change Protest Activism; Energy; Greenwashing; Oil; Solar, Add Tags
Add to My Group(s)
Go To Commenting
The views expressed herein are the sole responsibility of the author and do not necessarily reflect those of this website or its editors.