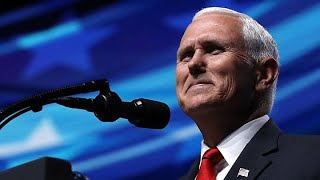 If the predictable election of 2016 fails to deliver the controllable neoconservative president, if a pseudo-McCarthyite campaign against an economically recovering and energy-independent Russia fails again, if putting yourown guys in the National Security Council also fails, and if an impeachment seems likewise doomed to peter out, what do you have left?

President Pence is ready to step in.

The beauty of Plan E, the fifth backup, is very precious. The very failures of previous attempts to amend the 2016 election and stop Trump's early promises to put America first, bring our troops home, secure borders, and spend the American taxpayer bounty on American production and infrastructure have paved the way for a wholesale public acceptance of the neoconservative agenda. This time, with relief and happiness.

It's almost as if we the sheeple have been given a collective dose of something feel-good, non-thinking, and cozy, and indeed we have.

The powers that be, the deep state, or the national security state, or a black-money hyper-empowered CIA, you pick, are in fine form in 2020. If these folks issued an annual statement, you would definitely want to invest. It looks really good on paper.

The CIA, now nearly 80 years old, has become a global power, with global influence. It should surprise no one that the CIA is also a major influence over US territory, the US Government, and the very opinions and perspectives of the average US citizen. Media and entertainment, technology and communications, access to cash, total information awareness of our money, movements, thoughts and speech, with the complete opacity of its own budget and actions -- all of this is part of the CIA's mission today. If you thought it was just other country's riots, assassinations and regime changes, you are behind the times.

I've been told that the CIA picks up some of its cash on pallets directly from the Denver Mint. If the state, as Augustine believed, is a band of thieves writ large, the CIA is the godfather.

Mike Pence was a predictable vice-presidential choice. A nondescript statist, evangelical "good" man, he served his role as a non-threatening, mildly competent second. He would also be a fourth or fifth tier hedge against the uncontrollable populist and hearty sinner Donald Trump, a man who had never won an election in his life before 2016. The CIA has decades of experience in choosing presidents, and vice presidents, manipulating both campaigns and popular opinion, creating crises on demand, and surveilling citizens and parties and candidates in other countries. The unexpected spontaneous and massive patriotic crowds convening for Trump throughout the 2016 campaign alone must have told the CIA what was written on the wall. Even with then CIA Director Brennan's assistance, and that of the FBI, Hillary couldn't catch the imagination of voters, or bring them out to see her preach, even when she spoke in our native accents.

But in a real war, you don't quit until you are forced to. In these four failures to bring down Trump, the deep state/CIA alliance has indeed achieved much, and won much. Trump has been constrained in his efforts to fulfill his most popular domestic initiatives, while the continued direct and indirect attacks on him in the mainstream, left-leaning "independent" and government media have worn down his popular support. Independents and libertarians who may have leaned Trumpward have all but peeled away and are looking at other parties and candidates. NeverTrumpers already favored Pence, and that was a major reason for his inclusion on the 2016 ticket. Troop deployments, Pentagon funding and interventionist wars have all been reignited. The Federal Reserve, once a Trump target, is enthusiastically burning up the printing presses, with very little mainstream discussion and with Trump applauding, not auditing. The upcoming nuclear destruction of Iran and the unleashing of a long wave of war and terror is just around the corner.

Who will best serve the deep state/CIA/petrodollar empire in November 2020 and beyond? Trump, if he lives long enough will be re-elected by actual voters, and as a lame duck he may prove difficult. The Democratic field is split between reliable lackeys and unreliable ones, and while wars may be ensured, there's nothing the CIA hates more than unpredictability. What to do with the gift of four failed domestic operations against Trump?

The answer is, devise a health event (mental or physical or both) that results in a sitting President Pence just in time for a reasonably short campaign, in a time of war, against an uninspiring array of old white man from a divided opposition party.

By now you are saying, Karen, I knew you were nuts, but this is just too much, even for you!

Normally, I would agree with you. But how else can we explain the fact that career operational CIA Gina "Chemical" Haspel and her sidekick, former 30-year CIA man,evidence destroyer, fellow torturer, and current CIA contractor Jose Rodriguez are already spending more time briefing and conspiring with Mike Pence than Donald Trump?

LRC columnist Karen Kwiatkowski, Ph.D., a retired USAF lieutenant colonel, blogs occasionally at Liberty and Power and The Beacon.
Related Topic(s): CIA; Empire; Evangelical; Presidency; Trump; Vice President Mike Pence, Add Tags
Add to My Group(s)
Go To Commenting
The views expressed herein are the sole responsibility of the author and do not necessarily reflect those of this website or its editors.

The Proper Response to WikiLeaks