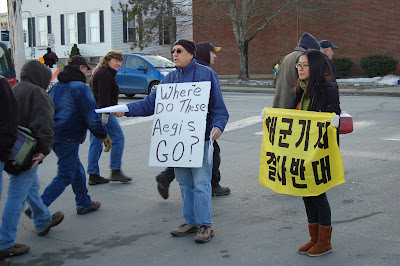 (Image by Unknown Owner)   Details   DMCA
Youngsil Kang from Gangjeong village on Jeju Island joined me at Bath Iron Works yesterday as workers streamed out of the shipyard at 3:30 pm. Youngsil is traveling around the U.S. for two months and did a talk in New York City last week. We were lucky to have her visit Bath yesterday. Two local newspapers covered her visit - one of the stories will appear in the paper today and the other next Thursday.

It was a surprise for the workers to see the Korean banner Youngsil held (No Navy Base) but of course they did not know what it said. I called out to them as they passed by telling them she was from South Korea and that she came from a place where the Aegis destroyers they build will be ported.

Usually on such a day I've had at least a dozen workers take my flyers but yesterday, with three cameramen snapping photos, only two took Youngsil's letter. (One of those taking photos was BIW worker Peter Woodruff who shares a weekly radio show with me on WBOR at Bowdoin College. Youngsil was impressed that Peter had the courage to come out when so many workers at the shipyard scurried away from us.) We submitted her letter to the local newspaper as a Letter to the Editor so hopefully the content will still be available to the public.

"U.S. Navy shipbuilding programs will not be slashed to meet an expected Pentagon-wide reduction in spending. We've placed a priority on shipbuilding," Sean Stackley, the Navy's top acquisition official, told reporters on January 12. "You can see a lot of alignment between the [new Obama] defense strategy and what the Navy does."

With the new Naval fleet, "We span the globe.....We have enormous payload capacity in our big boys," bragged Navy Undersecretary Bob Work at the Surface Navy Association symposium in Washington DC.

In a related story the Washington Post reported yesterday that "Two decades after evicting U.S. forces from their biggest base in the Pacific, the Philippines is in talks with the Obama administration about expanding the American military presence in the island nation, the latest in a series of strategic moves aimed at China. If an arrangement is reached, it would follow other recent agreements to base thousands of U.S. Marines in northern Australia and to station Navy warships in Singapore."

Obama is moving quickly to implement his "pivot toward the Asia-Pacific" as outlined in the Pentagon's recent Defense Guidance. This coming massive U.S. military buildup bodes ill for the likes of Jeju Island, Guam, Okinawa, the Philippines, Hawaii and more.

These military moves on the grand chess board make the coming Global Network meetings in Hawaii (Feb 18-21) and on Jeju Island (Feb 24-26) all the more important for our work. It is through these meetings that we will learn much more about the real impacts this "pivot" will cause to the people across the Asia-Pacific. From these meetings we will also be able to develop organizing strategies to increase our ability to support the beleaguered people who are always the ones to suffer from U.S. imperial designs.

As Obama and the Pentagon make their "pivot" toward the Asia-Pacific it is incumbent on the peace movement to also make an intellectual and organizing pivot toward that region as well.

Related Topic(s): Asia-pacific Economic Cooperation; Military; Navy; Obama; Organizing; Peace; Pentagon; Strategy, Add Tags
Add to My Group(s)
Go To Commenting
The views expressed herein are the sole responsibility of the author and do not necessarily reflect those of this website or its editors.