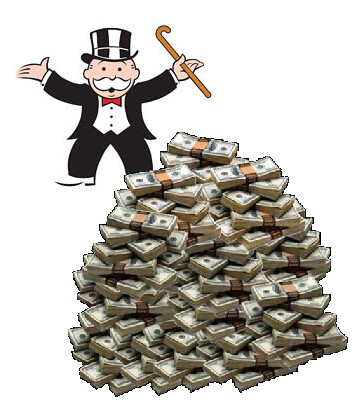 President Trump told us at the beginning of his crusade that he is "really, really rich!" That was generous of him because no one bothered to ask him, given his propensity to lie about everything and given recurring rumors that his net worth it vastly inflated. So we were all presumably reassured.

But then the matter of wealth became more complicated when he also, more recently, justified his selection of billionaires for his cabinet by saying that they know how to make money. The latter remark is bizarre in many ways. For one thing, it echoes the injunction, "Get rich!" uttered by a dimwitted nineteenth century French king and by Communist China's Chairman Deng. The latter used the expression to mark the turn in the 1980s from communism to (relatively) free enterprise.

The trouble with Trump's echoing of these predecessors is that he seems not to understand that there is a difference between running a business enterprise and running a government. The former exists solely to maximize profit; the latter exists to, among a host of responsibilities, provide for a fair and just (but not equal) distribution of power and wealth. No government, whether successful or not, liberal or conservative, advanced or backward is without a fiscal deficit. Businesses, on the other hand--at least the most successful ones--have massive assets that overshadow any debts. So despite the conservative platitude that the government should be run like a business, all thinking people in government or academia, unlike those who without responsibilities just carp from the sidelines, know that that cannot be done.

Governments, moreover, even the most unregulated capitalist ones, must also attend to a host of values that are none of business's concerns--moral, spiritual, esthetic, cultural. Businesses may, if they choose to, also spend money on some of these projects but only if they can justify such actions to the monomaniacal shareholders in terms of maximizing income in the long run. Governments are, by contrast, concerned with the overall health of the polity, which cannot be quantified financially.

This is one of the ways in which both Adam Smith and Karl Marx, the godfathers respectively of capitalism and communism, agreed with each other in a way modern thinkers reject. Their outlook in effect was "follow the money!" They took little account of the nationalistic, ethnic, psychological, religious impulses that drive people into unremunerative choices, choices that are currently being studied in depth by behavioral economists, choices that conflict with the conventional notion of man, at least in the marketplace, acting rationally. In other words, following the money may lead you down a rabbit hole. But Trump is apparently really, really rich, so attention must be paid to him.

Another assumption exhibited by Trump's remark is that merely accumulating a hoard of cash makes a person an asset to the society. Of course, some people are masters of acquisition, but the question he overlooks is, At whose expense? There are, to be sure, affluent persons who behave not only legally but also ethically. But their number shrinks in size next to the many who flourished at the expense of others--by exploiting workers, keeping wages at minimal levels, busting unions, as well as befouling the environment, poisoning drinking water and the air we breathe. The business pages of the leading newspapers sometimes read like the Police Gazette, as one scandal after another regularly surfaces. The big banks, for instance, were incriminated in the 2008 scandals, except for my own Wells Fargo, which had the privilege of only belatedly exhibiting outrageous criminal behavior.

One would think that given such a track record, the various tycoons would exhibit some humility or at least reticence. Not a chance. When President Obama began implementing his domestic policies, which involved raising taxes on the wealthy and adding regulations on businesses, many of the major business kahunas went ballistic. Some notoriously compared him to Hitler, as if raising the top income tax rate 6% to the levels in effect under President Clinton is comparable to, as one of them famously put it, invading Poland. That barrage of accusations hardly faltered during the ensuing seven years.

Pardon me for not knowing that one of the major charges against Hitler was his tax policy. While invoking examples from history, these whiners might also have reminded us of the old saw that he who does not learn from history is doomed to repeat it. Or the one about the only thing mankind learns from history is that we learn nothing from history. They might also have asked why, if a woman is allowed to have an abortion because of some right to privacy to be found somewhere in the Constitution, that same right does not also protect billionaires from the prying eyes of the readers of Forbes's annual listing of the top cash hoarders.

There is, however, an interesting detail that has curiously not gotten much attention: The wealth of the richest billionaires increased massively during the Obama years. It is instead the middle class and the poor who have a legitimate gripe with Obama. If the rich had any sense, which apparently they lack, they would conclude that "socialism," or at least the variant of it allegedly practiced by Obama, is a good thing and should be extended past his presidency.

And there is another observation to be made. You don't have to be a Sermon on the Mount Christian or a Buddhist monk or a stoic philosopher to raise a modest question: What sum of money will at long last satisfy conservative billionaires, who are so eager to shred the social welfare safety net and impoverish others in order to become even more prosperous themselves? If possessing billions is not enough, then they clearly are looking for happiness in the wrong places. Except for President Trump, who, bless his modest, humble, Christian heart, is happy to announce that he is really, really rich.

For 51 years Professor of English at Yeshiva University. Author of 13 books and over a hundred essays.
Related Topic(s): Banks; Billionaires; Business; Deficit; Government; History; Hitler; Money; Obama; Privacy; (more...) Socialism; Taxes, Add Tags  (less...)
Add to My Group(s)
Go To Commenting
The views expressed herein are the sole responsibility of the author and do not necessarily reflect those of this website or its editors.