A monkey urinated on Zambian President Rupiah Banda as he spoke to journalists at a news conference Wednesday.

Banda softly shouted: "You (monkey) have urinated on my jacket," and paused as he looked up to see the animal playing in a tree just above his chair. 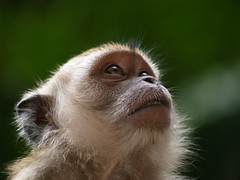 Politicians make us pissed off. They always say one thing to get elected and then follow the same corporate line to get rich while the rest of their country gets poorer and poorer.

Monkeys must get pissed off too. After all, their habitats are being destroyed and they generally get mistreated.

But there is this monkey that did the world a favor.

He did something about being pissed off. He pissed on the Zambian President.

I am thinking this monkey should be given some sort of international commendation for his actions.

We could all learn something from a pissed off monkey that pissed on a politician.

Related Topic(s): Habitat; Monkeys; Politicians, Add Tags
Add to My Group(s)
Go To Commenting
The views expressed herein are the sole responsibility of the author and do not necessarily reflect those of this website or its editors.