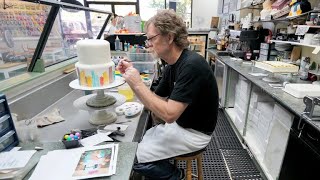 The Supreme Court sided with a Colorado baker who refused to make a wedding cake for a gay couple.
(Image by YouTube, Channel: CBS News)   Details   DMCA

Whatever the U.S. Supreme Court says is the law of the land. That doesn't make it the right law. The court's tradition of superb rulings is also rich in disastrous ones, whether it's Dred Scott in 1857, the 1896 Plessy-Ferguson consecration of segregation or the 1905 Lochner decision that the current court is re-baking for us morsel by morsel: Lochner for 30 years restored a master-slave-like definition of contracts between employer and employees, absolving business of ethical and humane responsibilities and denying employees most rights. The court's May 21 decision denying workers the right to sue over wage theft is a valentine to Lochner and yellow-dog contracts. Expect worse.

But that's why we have nine justices, not one, why yesterday's dissents are tomorrow's laws, and why, even in the words of Antonin Scalia -- who so stylishly scorned dissenters once he found himself a more frequent majoritarian -- "dissents augment rather than diminish the prestige of the Court." Oliver Wendell Holmes and Louis Brandeis spent most of their careers writing dissents that became law a few decades later. They were not ahead of their time. They were surrounded by colleagues who were, to put it gently, behind theirs. So it is with today's majority.

Last Monday the court in its wedding-cake ruling declared gays once again second-class citizens, at least when their sexuality has to compete with someone else's more stone-throwing version of Christianity. Justice Anthony Kennedy, who's written all the more liberalizing, pro-gay decisions of the last 20 years, authored this one as well, justifying it on its narrowest of grounds: he wasn't compromising the dignity of gays, he claims, he was just ensuring that a person's belief was not trampled. The end result is the same. Gays are trampled, because god forbid they'd have equal rights, which is all these queers were asking for.

The question was whether a Colorado baker called Jack Phillips had the right to deny Charlie Craig and David Mullins, two gay men, their wedding cake on religious grounds. The court said yes. But to get there it had to rely not on written law, which explicitly forbade the baker to do what the court excused. Colorado law states: "It is a discriminatory practice and unlawful for a person, directly or indirectly, to refuse, withhold from, or deny to an individual or a group, because of disability, race, creed, color, sex, sexual orientation, marital status, national origin, or ancestry, the full and equal enjoyment of the goods, services, facilities, privileges, advantages, or accommodations of a place of public accommodation."

Seems clear. But rather than relying on the law, Kennedy chose to rely on what some members of a civil rights commission said during proceedings that declared Philips's refusal illegal. Specifically, a commission member said: "Freedom of religion and religion has been used to justify all kinds of discrimination throughout history, whether it be slavery, whether it be the holocaust, whether it be -- I mean, we -- we can list hundreds of situations where freedom of religion has been used to justify discrimination. And to me it is one of the most despicable pieces of rhetoric that people can use to -- to use their religion to hurt others."

Kennedy found that statement hostile to religion, and therefore prejudicial to Phillips. On that basis, he ruled in Phillips's favor.

I agree that the commissioner's statement is at least partly hostile. It is also actual and indisputable. It is the reason we have laws that attempt to secularize the public sphere, so religion is respected but not turned into a cudgel with favored hierarchies: Beliefs shouldn't turn on a subjective judgment, like Kennedy's claim that Phillips's belief is "sincere." Sincere according to what criteria? Is a wife-beater more sincerely Christian because he can quote Ephesians' line about wives having to submit to their husbands? And what has his sincerity got to do with his violence, whatever the Bible says? Is a homophobe more sincere as a Christian homophobe because he knows his Leviticus and has 2,000 years of church-gilded bigotry behind him, as opposed to just a couple of years of U.S. v. Windsor? (Give this to Phillips: the Supreme Court was a few months away from declaring gay marriage legal when he declared Craig and Mullins uncakable.)

There's no getting out of the labyrinth of the absurd the moment belief of any sort is substituted as a fundament of law. That's why we have a secular constitution. The Bible isn't fact. It's hardly belief if consistency matters: for every verse drafted into service by homophobes I can quote you three times as many celebrations of love in every eroticized form from the Song of Songs even to that misogynist St. Paul. And not once will you find the word "homosexual" anywhere: the Bible is among our first and greatest guides to gender-neutral dignity. So when Phillips the baker claims that creating a wedding cake for two fags "celebrates something that directly goes against the teachings of the Bible," a good place to start is not to take that sincere belief at face value, but to test it on its own terms, Bible in hand.

For all that, no one was questioning Phillips's faith, only his refusal to do for one couple what he would do for any other, as long as they were heteros. His belief is a canard. His conduct in the context of his business is the only issue. His belief didn't even have anything to do with the gay couple's request. They weren't calling his beliefs in doubt or suggesting that by baking them a cake he was endorsing their sexuality. The cake was not about gay sex. Only Phillips made it so. The cake was about cake and icing: we'll never know. It never got as far because Phillips told them: "I'll make your birthday cakes, shower cakes, sell you cookies and brownies, I just don't make cakes for same sex weddings." In an ironic twist of the old homophobic complaint about gays constantly ramming their sexuality down other people's throats (a sexually supremacist complaint that suggests heteros somehow get to set the agenda of sexual mores) it was Phillips who was ramming his beliefs instead of a nice wedding cake down the couple's gullets.

But he was doing it sincerely and he was a good, white, past-middle-age Colorado Christian as opposed to, say, a particularly retrograde Saudi Muslim baker who thinks he can still get away with not making cakes for Jews (and gays and Christians and Iranians and Yemenis and women and Manchester United fans etc.). Or just a plain-vanilla atheist homophobe. So Phillips got a pass.

The court's 7-2 decision gives the impression that it was lopsided. Not so. The decision was actually very fragmented, with three opinions in the majority and one in dissent, all four clashing to some extent. Justice Elena Kagan, who wrote the dissent and was joined by Stephen Breyer, two reliable liberals, devoted a couple of lines to supporting Kennedy's requirement of "neutral and respectful consideration" to religious views, then spent the rest of her four pages showing how the Colorado Civil Rights Commission could have more easily and flatly rejected Phillips's claim. In other words, Kagan corrected the rights commission's ruling by showing its amateur flaws and writing what amounts to a dissent in the form of a concurrence while banking a future favor in Kennedy's account.

Another potential silver lining: Kennedy clearly signaled that what officials say on the way to a decision can be just as important in judging the legality of the decision as the decision's wording. That should not bode well for President Trump, whose Muslim ban was paved with the bad intentions of explicitly vile comments prejudicial to Islam as a whole. If Kennedy falls on the administration's side in that decision on the legality of the ban, due any day now, his contradiction will be Bible-worthy.

But that's a different story. In Masterpiece Cakeshop, the court endorsed what amounts to a sign in the window: No wedding cakes for gays. I expect that in Taliban country. I don't expect it in the United States. This court just made it permissible all over again. It won't last. The ruling will be thrown out sooner or later. But until the dissenting opinions win the day, the dignity of millions will be sacrificed at the hetero-altar of religious correctness.

Related Topic(s): Discrimination; Homophobia; Refusal; Religion; Weddings, Add Tags
Add to My Group(s)
Go To Commenting
The views expressed herein are the sole responsibility of the author and do not necessarily reflect those of this website or its editors.