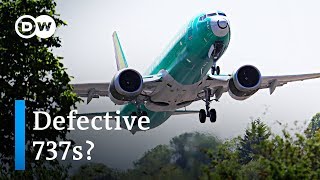 Boeing faces more problems with grounded 737 Max airplanes | DW News Airplane manufacturer Boeing has admitted that some of its 737 Max planes could have a defective wing part. The company has been under intense pressure ...
(Image by YouTube, Channel: DW News)   Details   DMCA

The grounding of the Boeing 737 MAX passenger jet is far from the latest news.

The company is being sued by 400 pilots "trained to fly the fourth-generation narrow-body 737 MAX aircraft. They accuse the Chicago-based aviation corporation of hushing known concerns about the glitch-ridden equipment installed in the jets." [1]

The suit involves "the inherently dangerous aerodynamic handling defects...designed to prevent the plane from stalling."

Apparently the plane is equipped with two sets of sensors and if they don't match the pilots are notified of the discrepancy.

Only for them "to work properly, an optional set of indicators needs to be installed on the plane, and only 20 per cent of the 737 MAX jets had them. Boeing recently admitted that it knew of the problem since at least 2017, but did not notify the US Federal Aviation Authority (FAA) until after the Lion Air flight with 189 people aboard crashed in Indonesia last October. Moreover, it did not plan to update the software until 2020."

The lawsuit says, "Boeing engaged in an unprecedented cover-up of the known design flaws of the MAX 737. The pilots accuse Boeing of providing little instruction of how to handle the anti-stalling feature which is only briefly mentioned in flight manuals. They allege that such a casual approach to familiarizing pilots with new software was deliberate-and was meant to save the cost of introducing new-simulator-based training so that the pilots would take-up revenue-generating routes as quickly as possible."

They accuse "Boeing and other plane manufacturers from placing corporate profits ahead of the lives of the pilots, crews and general public they service."

Isn't that at the heart of this whole MAX 737 episode? Of course it is. It's certainly become the way for aircraft manufacturers in the US.

As with Boeing, Lockheed knew of the design flaws-and in their case so did the American military-but that hasn't stopped the manufacturer or the military from mass producing the F-35 which is supposed to happen by the end of this year.

Probably being in the American military prevents pilots of the F-35 from bringing a similar lawsuit against Lockheed Martin.

Even so Lockheed Martin as well as Boeing's knew of the flaws in their planes yet chose to go ahead anyway putting profits ahead of safety. Such practices has become the American way of corporate behemoths doing business-which of course isn't confined to the American airplane manufacturers.

Sadly it's become endemic with all big corporate America.

Retired. The author of "DECEIT AND EXCESS IN AMERICA, HOW THE MONEYED INTERESTS HAVE STOLEN AMERICA AND HOW WE CAN GET IT BACK", Authorhouse, 2009
Related Topic(s): Boeing; Dangerous; Design; Lockheed; Practices; Safety Lapses, Add Tags
Add to My Group(s)
Go To Commenting
The views expressed herein are the sole responsibility of the author and do not necessarily reflect those of this website or its editors.