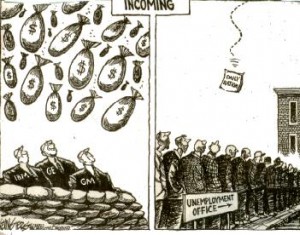 Seems our government has decided the best way out of this economic morass is a state of perpetual war. Ironically, it's the Bush Crime Family's never-ending terror wars that are responsible for the lion's share of the bankrupted economy in the first place. But never mind about all that.

A recent report released last week from a commission tasked with studying government spending and losses details how corruption and outright theft by war profiteers in Iraq and Afghanistan have cost taxpayers billions of dollars in missing government monies allocated for the so-called "war effort."  Think about it, the warmongers can't seem to liberate the peoples of these ravaged nations, but seem adept at liberating us from our cash.

Not unlike the banksters and Big Corporations who continue to bleed the middle class to the brink of death. As a nation, we are in serious trouble if our government continues to allow a minority of Neocons in the Pentagon, Wall Street, and Corporate boardrooms to steal us blind.

Here's a message to Wisconsin's Scott Walker and those other shameful Republican governors who continue to issue tax credits for the rich while demanding public employees work for pennies without collective bargaining rights, or cut programs that benefit sick children or needy mothers under the guise of stopping "wasteful spending" . . . why not petition your cronies on Capitol Hill to get some of the estimated $200 billion back from these thieves? That would solve the national budget crunch, wouldn't it? Can you imagine what kind of strong, robust, secure country we would be if we had not wasted these hundreds of billions of dollars on these never ending terror wars? Not to mention the human lives and the cost to our maimed and traumatized troops who survived?

Have you heard about this report? Of course not. The report delves into "wartime contracting," saying that "criminal behavior and blatant corruption" were responsible for much of the waste, and concluded -- "When it comes to oversight of contingency contracting, we've been driving beyond the reach of our headlights. Reforms are badly needed."

This level of graft is a real yawner to the right-wing media, who only care about cutting teacher's salaries and public union rights and benefits, not stopping the billions of dollars being stolen right out of our pockets.

Kathy never expected a career in radio as a talk show producer. Born and raised in Atlanta, Georgia, Kathy was completing her nursing degree when in 2001 - in an emergency - she was asked to fill in as the producer of Mike's program. Within a few (more...)
Related Topic(s): Corruption; Neocons; Republican; Warmongers, Add Tags
Add to My Group(s)
Go To Commenting
The views expressed herein are the sole responsibility of the author and do not necessarily reflect those of this website or its editors.