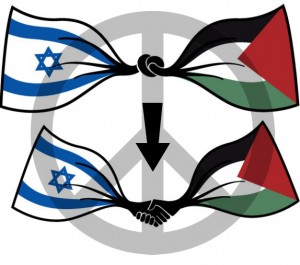 Working for peace in Palestine-Israel
(Image by newark-umc.org)   Details   DMCA

IF SOMEONE had told me 50 years ago that the rulers of Israel, Jordan and Egypt had met in secret to make peace, I would have thought that I was dreaming.

If I had been told that the leaders of Egypt and Jordan had offered Israel complete peace in return for leaving the occupied territories, with some exchanges of territory and a token return of refugees, I would have thought that the Messiah had come. I would have started to believe in God or Allah or whoever there is up there.

Yet a few weeks ago it was disclosed that the rulers of Egypt and Jordan had indeed met in secret last year with the Prime Minister of Israel in Aqaba, the pleasant sea resort where the three states touch each other. The two Arab leaders, acting de facto for the entire Arab world, had made this offer. Benyamin Netanyahu gave no answer and went home.

So did the Messiah.

DONALD TRUMP, the comedian-in-chief of the US, some time ago gave his answer to the question about the solution of the Israeli-Palestinian conflict. Two-states, one-state, whatever the two sides agree on, he answered.

He could just as well have answered: "Two-states, one-state, three-states, four-states, take your pick!"

And indeed, if you live in la-la-land, there is no limit to the number of states. Ten states is as good as one state. The more the merrier.

Perhaps it needed a total innocent like Trump to illustrate how much nonsense can be talked about that choice.

ON THE fifth day of the Six-day war, I published an open letter to the Prime Minister, Levy Eshkol, urging him to offer the Palestinians the opportunity to set up a state of their own in the West Bank and the Gaza Strip, with East Jerusalem as its capital.

Immediately after the war, Eshkol invited me for a private conversation. He listened patiently while I explained to him the idea. At the end he said, with a benevolent smile: "Uri, what kind of a merchant are you? A good merchant starts by demanding the maximum and offering the minimum. Then one haggles, and in the end a compromise is reached somewhere in the middle."

"True," I answered, "if one wants to sell a used car. But here we want to change history!"

The fact is that at the time, nobody believed that Israel would be allowed to keep the territories. It is said that generals always fight the last war. The same is true for statesmen. On the day after the six-day war, Israeli leaders called to mind the day after the 1956 war, when the US President Dwight D. Eisenhower and the Soviet President Nikolai Bulganin compelled David Ben-Gurion to give back all the occupied territory ignominiously.

So there seemed to be only one choice: to give the territories back to King Hussein of Jordan, as the great majority advocated, or to give them to the Palestinian people, as my friends and I, a tiny minority, suggested.

I remember another conversation. The Minister of Trade and Industry, Haim Zadok, a very clever lawyer, made a fiery speech in the Knesset. When he came out of the plenum, I admonished him: "But you don't believe a single world you just said!" To which he replied, laughingly, "Anybody can make a good speech about things he believes in. The art is to make a good speech about things you don't believe in!"

Related Topic(s): Conflict; Israeli-palestinian; State, Add Tags
Add to My Group(s)
Go To Commenting
The views expressed herein are the sole responsibility of the author and do not necessarily reflect those of this website or its editors.