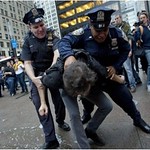 As the filming of police killing unarmed African Americans has led to a wave of protests and calls for reform across the US, one aspect of the controversy has received little attention: the after-the-fact targeting, harassment, and arrest of many of those who recorded and publicized the killings in the first place.

Today, dozens of Oscar-winning and nominated documentary film-makers -- including Laura Poitras, Alex Gibney and many others -- published an open letter calling on their fellow film-makers to defend these brave citizen journalists and activists who are now seemingly targets of the police themselves. They are also demanding the justice department investigate the disturbing pattern of police abuse.

With little media attention, many of the people who filmed the most notorious police killings in the last two years have subsequently been stalked and arrested by the very police departments that they filmed. The two most recent killings that made headlines around the country -- the death of Alton Sterling in Louisiana and Philando Castile in Minnesota -- are only the latest examples. Taken together, the pattern is startling, and for the first time, the letter's organizer, director David Felix Sutcliffe, has cataloged many of these incidents in one place.

After Castile's fiance, Diamond Reynolds, filmed his dying moments on Facebook Live, she was cuffed, locked in a police car, separated from her child and held in police custody for eight hours. "My daughter will be forever scarred by what the police did," she said afterwards. "They took me to jail. They didn't feed us. They put me in a room and separated me from my child. They treated me like a prisoner."

The owner of the convenience store outside where Sterling was killed, Abdullah Muflahi, was also arrested by police, had his cellphone footage confiscated without a warrant, and was also locked up for four hours in the back of a police car. He has filed a lawsuit against the police officers involved.

Related Topic(s): Citizen Journalism; Citizens Arrest; Journalists Detained; Police Brutality; Rights, Add Tags
Add to My Group(s)
Go To Commenting
The views expressed herein are the sole responsibility of the author and do not necessarily reflect those of this website or its editors.