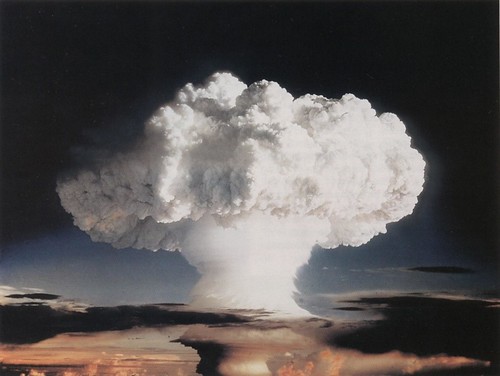 Amid the media frenzy surrounding the Nunes-Trump memo, the Pentagon officially released its 2018 Nuclear Posture Review (NPR) last week. The NPR calls for the development of leaner, meaner nuclear weapons and lowers the threshold for the use of nukes. Donald Trump must be thrilled. During the presidential campaign, he questioned a senior foreign policy adviser about nuclear weapons three times during a briefing, asking, "If we had them why can't we use them?"

The NPR calls for "low-yield" nuclear weapons on submarine-launched ballistic missiles -- weapons that could cause as much damage as the bombs the United States dropped on Hiroshima and Nagasaki.

In its 1996 advisory opinion, the International Court of Justice (ICJ) concluded that while the use of nuclear weapons might be lawful when used in self-defense if the survival of the nation were at stake, a first-strike use would not be.

"However," the IJC continued, "the Court cannot conclude definitively whether the threat or use of nuclear weapons would be lawful or unlawful in an extreme circumstance of self-defence, in which the very survival of a State would be at stake."

Russia, China and North Korea are singled out as potential nuclear threats in the NPR. The document "erroneously states that the United States needs new nuclear weapons because 'China is expanding and modernizing its considerable nuclear forces' and is pursuing 'entirely new nuclear capabilities,'" according to the Union of Concerned Scientists (UCS).

Gregory Kulacki, China project manager at the UCS Global Security Program and author of the UCS's newly released white paper, said, "There is no evidence that nuclear weapons are becoming more prominent in China's military strategy or that China has changed its longstanding no-first-use policy."

The NPR has alarmed foreign leaders. Mohammad Javad Zarif, foreign minister of Iran, tweeted that the NPR brings "humankind closer to annihilation." The United States is "shamelessly threatening Russia with a new atomic weapon," Iranian president Hassan Rouhani stated. "The same people who supposedly believe that using weapons of mass destruction is a crime against humanity are talking about new weapons to threaten or use against rivals," he added.

Ren Guoqiang, a spokesman for the Chinese defense ministry, said in a statement, "We hope the US side will discard its 'cold-war mentality,' [and] shoulder its own special and primary responsibility for nuclear disarmament."

Where Is This Coming From?

Keith Payne, president of the National Institute for Public Policy, was one of the key drafters of the NPR. In 1980, Payne astoundingly claimed in Foreign Policy that the United States could win a nuclear war with the Soviet Union. US casualties, Payne argued, could be limited to "approximately 20 million people," which, he called, "a level compatible with national survival and recovery."

Related Topic(s): Nuclear Energy Scare Tactics; Nuclear Option; Nuclear_insanity; Pentagon, Add Tags
Add to My Group(s)
Go To Commenting
The views expressed herein are the sole responsibility of the author and do not necessarily reflect those of this website or its editors.