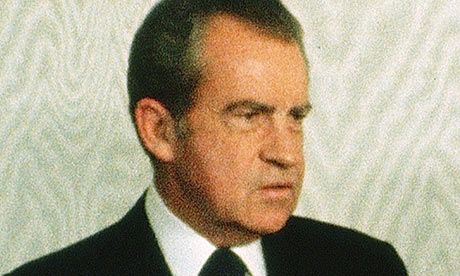 In 1971, when the New York Times decided to publish the Pentagon Papers leaked to it by Daniel Ellsberg, it knew it was triggering a major fight with the secrecy-obsessed Nixon administration. As expected, the Nixon administration sued the NYT in an attempt to ban it from publishing the documents, but the US Supreme Court, in a landmark decision for press freedom, ruled the prior restraint unconstitutional.

The paper's general counsel at the time, James Goodale, said that he counseled the paper to publish despite "the more likely scenario that everyone feared was the fact that they could have gone to jail," and he subsequently became an outspoken defender of press freedoms. He now has a new book entitled "Fighting for the Press" in which he argues, as the Columbia Journalism Review puts it, that "Obama is worse for press freedom than former President Richard Nixon was."

CJR has an amazing interview with Goodale, some relevant excerpts from which relate to many topics written about here:

Let's talk about some of the challenges to press freedom now.

"The biggest challenge to the press today is the threatened prosecution of WikiLeaks, and it's absolutely frightening. ...

"The one case that is troublesome and is still out there as we speak is the case of James Risen, who was a journalist who was leaked national security information in respect to the warrantless wiretapping program, which was disclosed by The New York Times.

"He's won his case, but most people are going to be surprised if he can win it on appeal. It's been sitting on appeal for a year. Now what's going to happen -- if the shoe drops and we're back to Judy Miller, it means Risen goes to jail. And if in fact it doesn't turn out that way and it turns out well, we'll have the question of whether the government will go to the Supreme Court and we will always have the question whether it will turn out well for the next Risen. And who's behind this one? Obama."

Could you talk a bit about President Obama's approach to classified information and press freedom?

"Antediluvian, conservative, backwards. Worse than Nixon. He thinks that anyone who leaks is a spy! I mean, it's cuckoo."

"Well, I think it's very much the same thing. We have a leak of classified information. And by the way -- you've got to remember [Bradley] Manning's the leaker. Everyone says Assange is a leaker. He's not a leaker. He's the person who gets the information.

"So why we're so concerned about the prosecution of Assange is what he did is the same as what the Times did in the Pentagon Papers, and indeed what they did with WikiLeaks. The Times published on its website the very same material WikiLeaks published on its website. So if you go after the WikiLeaks criminally, you go after the Times. That's the criminalization of the whole process."

So you think that if John McCain or Mitt Romney were the president and doing this, there would be a different response?

"We'd be screaming and yelling and the journalists would be going crazy. And that doesn't speak well of journalists."

Related Topic(s): Journalism; Obama Effect; Obama Issues Policy; Obama Like Bush; Obamacare; Wikileaks, Add Tags
Add to My Group(s)
Go To Commenting
The views expressed herein are the sole responsibility of the author and do not necessarily reflect those of this website or its editors.