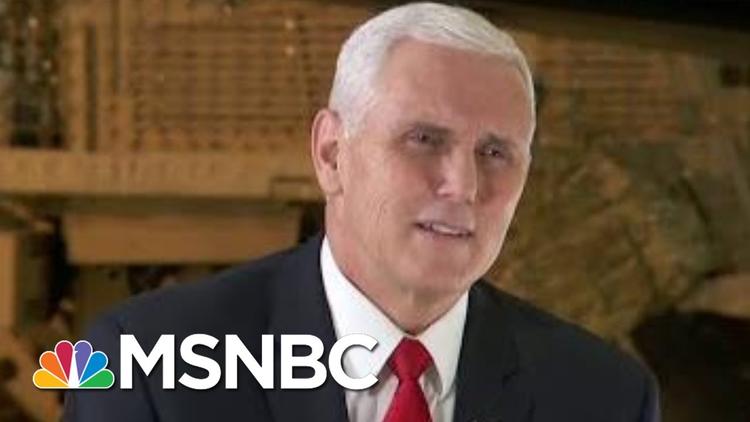 Vice President Mike Pence says he would be happy to have disgraced former National Security Adviser Michael Flynn back in the White House.

The statement came after Bill Barr's Department of Justice said it did not want to prosecute Flynn for lying to the FBI. Note, Barr does not deny that Flynn committed this crime. Hell, Flynn twice admitted it in open court. In reality, the decision isn't Barr's but that of Judge Emmet Sullivan. Some 2,000 former prosecutors have urged the judge to ignore Barr, on the grounds that the Department of Justice shouldn't be doing favors for friends of the president.

Now is the time to remind everyone that in the 1990s, Mike Pence argued that President Bill Clinton should be impeached and removed from office for telling a lie. In his smarmy way, Pence then said it was a moral issue.

As comedian Jerry Seinfeld said at the time, "Lying about sex? Everyone lies about sex. Without lying, there would be no sex."

Flynn undermined US national security by frequent unauthorized contacts with the Russian ambassador, in which he made pledges that the US law of the land would be overturned.

And then he lied about it to the FBI

I'll let you decide which of these lies amounted to an impeachable offense. Apparently Pence would only be outraged if Kislyak had been a Russian bombshell and Flynn had slept with her, and then lied about that.

Flynn confessed on two separate occasions to two different judges that he had lied, twice, to FBI agents who investigated him in January of 2017. He had earlier lied to Pence himself, denying that he had been in telephone communication with then Russian ambassador Sergey Kislyak in late fall of 2016 when Barack Obama was still president. Obama had placed sanctions on Russia, and Flynn called up Kislyak and told him not to worry about them, that Trump would undue them. Since Flynn at that time was a private individual, his attempt to undo official US government policy was the height of impropriety, and probably a crime in itself.

But the lying to the FBI was what landed him in hot water. Jennifer Emily at the Dallas Morning News explains that Federal law says,

"Statements or entries generally (a) ... [W]hoever, in any matter within the jurisdiction of the executive, legislative, or judicial branch of the Government of the United States, [ 1 ] knowingly and willfully (1) falsifies, conceals, or covers up by any trick, scheme, or device a material fact; (2) makes any materially false, fictitious, or fraudulent statement or representation; or (3) makes or uses any false writing or document knowing the same to contain any materially false, fictitious, or fraudulent statement or entry; shall be fined under this title or imprisoned not more than 5 years."

I had written earlier:

"Flynn had visited Moscow in 2015 and was seated with Vladimir Putin at a gala in celebration of the founding in 2000 of Russia Today, the Russian government-owned cable news channel. Flynn was allegedly paid tens of thousands of dollars for this appearance. Since he is a retired general, he should not have taken money from a foreign government and/or should have reported it, since officers can always be called back up."

Then there are allegations that Flynn began meeting with Russian ambassador to the US Sergey Kislyak. After the Trump victory, which many believe was orchestrated by Russian cyber-cons, Flynn was in regular contact with Kislyak. He called him five times on Christmas Day. In a later telephone conversation, Flynn is alleged to have reassured Kislyak that new Obama sanctions would be reversed by the Trump administration.

Related Topic(s): Bill Barr; Clinton Bill; Justice; Michael Flynn; Pence-Mike; Trump Dangerous, Add Tags
Add to My Group(s)
Go To Commenting
The views expressed herein are the sole responsibility of the author and do not necessarily reflect those of this website or its editors.