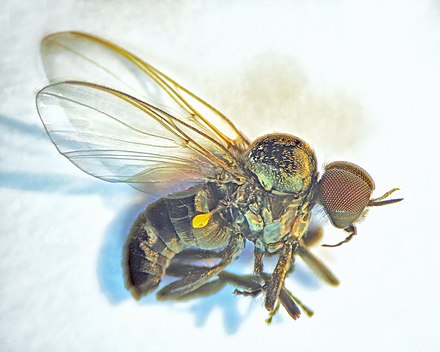 A very large black fly lingered on Pence's white hair for over two minutes during the debate, while talking about black and white issues. It inspired a creative outpouring of twitter wisdom ranging from comments regarding the type of things flies are attracted to, to "Black Flies Matter."

The black fly had over 100 twitter accounts by the end of the evening.

RT @chelsea_janes: A white man just told a Black woman that saying there is systemic racism in the criminal justice system is "an insult" a… at

RT @OleVetUSAF: The black house fly landing on Pence's head... Further, Proves what I have suspected for years, Pence does have 💩 for bra… at

RT @AyannaPressley: Pence didn't come to debate, he came to play dodge ball. He dodged on COVID-19 response, dodged on pre-existing conditi… at

RT @keithboykin: Mike Pence is talking so much shit that a fly landed on his head and stayed there. #VPDebate at

RT @Frank_Schaeffer: Talk about dead man walking... fly mistakes Mike Pence for rotting corpse and lays eggs on his head. If this isn't an… at

Related Topic(s): Debate; Hair; Pence-Mike; Presidential Debates, Add Tags
Add to My Group(s)
Go To Commenting
The views expressed herein are the sole responsibility of the author and do not necessarily reflect those of this website or its editors.