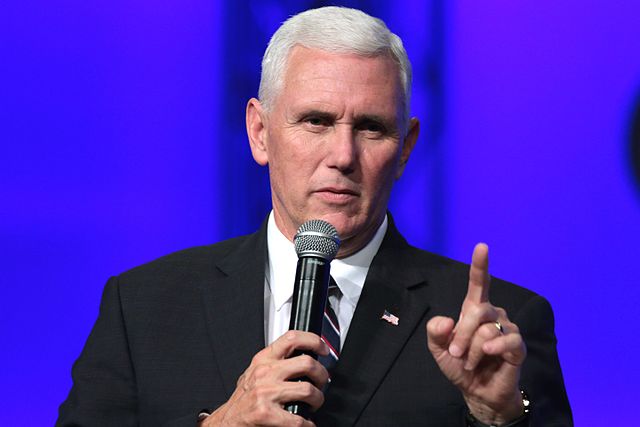 There has been much throwing about of brains on the subject of anti-Semitism lately. But in the ceaseless and almost entirely cynical media-political imbroglio that has followed the "Benjamins" tweet of Rep. Ilhan Omar, I've seen nothing said about perhaps the most intense and thoroughgoing form of anti-Semitism in America today: an anti-Semitism that is not only prevalent but dominant in the halls of power at the moment.

This virulent anti-Semitism which in at least one respect surpasses that of the Nazis themselves is passionately embraced by millions of Americans. Its most prominent adherent right now in terms of actual power is the vice president of the United States, Mike Pence. (See note 1 below.) So we will examine Mike Pence's beliefs as an exemplar of this growing brand of anti-Semitism.

Mike Pence believes, with all his heart, that every single Jewish person on the planet will -- and should -- burn in the ovens of Hell for all eternity ... unless they stop being Jews and accept his own version of the Christian faith. There is no equivocating here. Pence is a passionate evangelical Christian. He believes that the Bible is the literal word of God, and that his sect's interpretation of that word is true, correct and everlasting. I know his type of Christianity very well, for I was raised in it. There can be no question what Mike Pence, and millions of Americans, believe about Jews and their ultimate fate.

So let's continue. Mike Pence not only believes that every Jew alive today will be tortured and tormented for eternity, but that every single Jew since the time of Jesus Christ is right now burning and writhing in undying flames unless, again, they had cast off their cursed Jewishness at some point and become Christians.

Thus Mike Pence believes that every Jewish person killed in the Holocaust with a few exceptions (see note 2 below) is even now, right this minute, screaming madly with unbearable pain as they feel the fire searing into their flesh: fire that never stops lashing, flesh that never burns away. Mike Pence believes that almost all of the Jews killed in the Holocaust went directly from the torment of the gas chamber or the shooting pit into the fires of Hell, where they are even now undergoing tortures and abominations far worse than the Nazis could ever inflict.

It's worse because there is no relief, not even for a moment. There is no chance even to lie down on a wooden plank for three hours in a bone-cold winter night after a back-breaking day of slave labor. There is not even the hope that your mind will break and you'll lose conscious awareness of your situation, or that the torture will finally end at some point in the relief and oblivion of death.

There is none of that. No relief. No hope. No end. Only the unbearable pain of your entire body burning in flames, while you remain fully conscious, fully aware of every microsecond of agony. Forever. For millions of years, billions of years, trillions of years. This is what Mike Pence believes should happen to every single Jewish person who doesn't renounce their literally God-damned Jewishness. He believes they deserve to suffer unending torment and pain ... because they didn't believe what he believes about God and Jesus and salvation.

The beliefs of Mike Pence about the eternal torment of Jews are the very embodiment of an extreme anti-Semitism. In its feverish vision of the ultimate fate of the Jewish people an eternal Final Solution it is even more brutal and cruel than Nazism itself.

2.
Now, Mike Pence might argue that he and his fellow sectarians are not anti-Semites, because they don't hate Jews just for being Jewish, as the Nazis did. In fact, Mike Pence and his religious compatriots will tell you they actually love Jews, deeply and fiercely, which is why they support the Israeli government far more blindly and fervently than, say, most Jewish Americans do. They love Jews so much they want to spend eternity with them millions and billions and trillions of years! They love Jews so much that many of them pray nightly that every Jew in the world will be saved from the Jewishness they were unfortunately inflicted with at birth. They don't want a single Jew to writhe and scream forever in the fires of Hell. Let us grant them that.

Nevertheless, Mike Pence and his fellow sectarians are cheerfully resigned to the fact that this writhing and screaming will be the fate of any stiff-necked Jew who fails to accept Jesus as their Lord and Saviour. They believe it is part of God's perfect plan that such Jews will burn in unrelenting agony for billions and trillions of years. They believe the eternal torture of the Jews is not only justified; it is righteous, holy, even glorious. Because it is in accordance with the divinely ordained structure of the universe.

Here, Mike Pence might object again. The fate of eternal hellfire awaits all those who refuse to acknowledge Jesus Christ as Lord, he might say. We're not just singling out the Jews for "special measures." And that's true. But it was also true of the Nazis. They didn't just persecute and torture and murder Jews. There were many different kinds of people whom the Nazis felt violated their idea of the divinely ordered structure of the universe and deserved punishment, torment and elimination. But the fact that condemnation is spread around various groups doesn't mitigate the suffering of any specific group being targeted.

And with both Mike Pence and the Nazis, it is the Jewishness of the Jews that condemn them. For the Nazis, a Jew could be an exemplary person with a record of long and faithful service to the German nation; it didn't matter. They were Jewish and thus were condemned. For Mike Pence, a Jew could be an extraordinarily loving and giving individual, someone who has sacrificed for others, helped the poor and sick indeed, lived a blameless, Christ-like life in every respect; it doesn't matter. If that person does not renounce their Jewishness, then it is their very Jewishness their adherence to their own faith rather than the faith of Mike Pence that will condemn them to eternal damnation.

I suppose one might say that non-religious Jews will be lumped in with all the other non-believers on the transport trains to Mike Pence's eternal Auschwitz, and therefore it's not their Jewishness per se that condemns them. Whether that will be any comfort to them as they screech in agony alongside religious Jews is unlikely. But let us concede that on this point, Mike Pence and his fellow sectarians are not as anti-Semitic as the Nazis: they only condemn religious Jews for being Jewish; non-religious Jews will go to Hell for other reasons.

And in fact, I'm not here to equate evangelical Christianity with Nazism. Do Mike Pence and his fellow sectarians advocate the persecution of living Jews in any way, much less along Nazi lines? No, of course not. (Although it has to be said that Mike Pence and Donald Trump and millions of their followers seem happy to persecute Muslims in ways very similar to the Nazis' early treatment of Jews. Whether their anti-Islamism will lead them into emulating the Nazis even further in their persecution of a demonized minority remains to be seen. But they are not there yet.)

Related Topic(s): Anti-semitic; Anti-semitism; Evangelical; Fire; Holocaust; Nazis; Pence-Mike, Add Tags
Add to My Group(s)
Go To Commenting
The views expressed herein are the sole responsibility of the author and do not necessarily reflect those of this website or its editors.