Did anyone hear Adam Schiff's closing senate "trial" statement? it was EXCELLENT! the entire statement is available on YouTube and I suggest everyone watch it. It's the most factual and impassioned plea for sanity and justice I've heard for some time. Schiff, Jerry Nadler, Chuck Schumer, the entire House Impeachment Managers and other Democrats have spoken and acting incredibly WELL during trump's impeachment process. And with Nancy Pelosi's tearing up trump's state-of-trump campaign speech yesterday I've never been so impressed with the Democrats in my life! they need to turn up the heat, keep upstaging trump and EVEN impeach him AGAIN!

Pelosi is a national hero for finally giving trump a taste of his own medicine! trump's a coward, liar and criminal and deserving of NO RESPECT from ANYONE! no dem or independent or republican in their right mind is going to condemn Pelosi for displaying the COURAGE and integrity she demonstrated by tearing up trump's sham state-of- trump campaign speech! my only complaint is that it should've been done a LONG DAMNED TIME AGO! 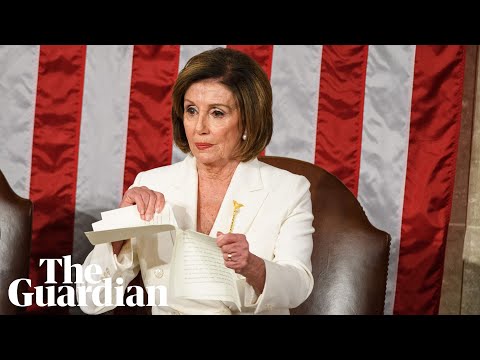 Nancy Pelosi appears to prepare in advance to rip up Trump's speech The US House speaker seemed to make a small tear in some pages of the text of Donald Trump's State of the Nation address almost an hour before she ...
(Image by Unknown Owner)   Details   DMCA

Every newspaper or news outlet that proclaims trump was acquitted of impeachment is misrepresenting the facts. First off, he was already impeached before the case was sent to the Senate. Second, the Senate didn't find trump innocent. There was no trial. The senate GOP refused to conduct one. And many GOP Senators publicly declared to fix the so-called "trial" in trump's favor even before it began. And trump himself did all he could to cajole, bribe, threaten, and corrupt the Republican Senators, who were to act as his jury, throughout the proceedings. The GOP in the senate just decided and agreed to violate the constitution and cover-up and dismiss trump's crimes and violate their oaths of office. So, no, trump wasn't "acquitted" of anything.

The GOP again failed to honor their oaths. First their oaths of office to honor and protect the constitution and then their oaths to be impartial jurors during the GOP led sham senate trial of trump. ALL IN THE NAME OF TRUMP! TRUMP'S A CRIMINAL and the GOP has chosen to be complicit in his crimes and engaged in a MASSIVE cover-up! the GOP has sunk to a new low; a gutter level to which even I didn't think they'd ever sink. Right now, our constitution is COMPLETELY inactive and non-functional. We have NO law governing or restricting the criminal actions of the political party in power!

Yes, The Republican Mitt Romney, when he voted to "convict" on the first impeachment article, did half of the right thing and should be commended for it. The question is - how could you vote guilty on impeachment article one and not on article two? You can make up all kinds of excuses for Trump's abuse of power but his obstruction was blatant, obvious and undeniable. Regardless of how ANYONE voted on article one, to deny guilt on article two is legally unjustifiable and thus ethically IMPOSSIBLE! Another question is - just how long is trump going to be allowed to continue his 35 year crime spree?

founder of the philosophy of equalism. everything I post will be a reflection of equalism. please, my name is to be spelled in lower case only.

Pelosi is a National Hero

Did Trump refuse to act on the Covid-19 virus to curb illegal immigration?

the 4 D's of Trump and his Cult: Denial, Deflection, Delusion and Deception

Why Did Roberts Admonish Nadler?

The Impeachment Process was Indeed Intended to Reverse an Election