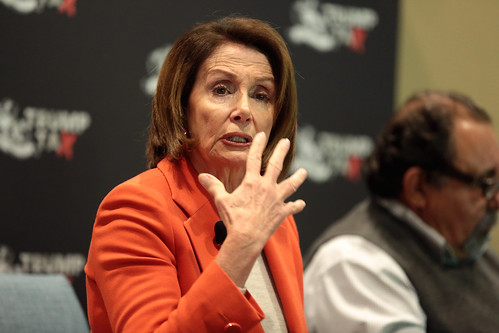 In an interview with the Washington Post yesterday, House Speaker Nancy Pelosi announced that she opposed the pursuit of the impeachment of President Trump, shortly before Mueller's investigation into Trump-Russia collusion is expected to wrap up.

"I'm not for impeachment," Pelosi told the Post. "This is news. I'm going to give you some news right now because I haven't said this to any press person before. But since you asked, and I've been thinking about this: Impeachment is so divisive to the country that unless there's something so compelling and overwhelming and bipartisan, I don't think we should go down that path, because it divides the country. And he's just not worth it."

The response to Pelosi's remarks has been swift and strong.

"Wrong!" exclaimed MSNBC's Russiagate con man Malcolm Nance via Twitter. "What the hell is wrong with the @SpeakerPelosi Congress that they absolve themselves of their duty! Nothing is criminal anymore?! Trump can do and say like a dictator as he pleases? All of his crimes are OK even if you see them? This requires a public outcry. #Disgraceful"

"I like Speaker Pelosi but this is NOT the right approach," tweeted Michael Avenatti of Stormy Daniels fame. "If Trump has committed impeachable offenses, he must be charged and he must face a trial in the Senate. Would the Repubs take this approach? Hell no! And this is why we get outplayed."

"Sorry, Madam Speaker," tweeted Esquire's Charles P Pierce. "If you really believe the president* is an unprecedented threat to the Constitution, your oath demands that you begin the process to remove him. It's your job."

Wrong! What the hell is wrong with the @SpeakerPelosi Congress that they absolve themselves of their duty! Nothing is criminal anymore?! Trump can do and say like a dictator as he pleases? All of his crimes are OK even if you see them? This requires a public outcry. #Disgraceful. https://t.co/7m3lElzP5n

The House's most virulent Russiagater, however, sang a different tune.

"If the evidence isn't sufficient to win bipartisan support for this, putting the country through a failed impeachment isn't a good idea," Congressman Adam Schiff told CNN yesterday.

As you might expect, those voices in alternative media who've been voicing skepticism of the Russiagate narrative since the beginning have been having a ball with this one.

"BREAKING: The Democrats' Congressional leadership is realizing that their two-year Russia conspiracy theory is not going to pan out," tweeted journalist Aaron Mate', who has been in my opinion the single most lucid Russiagate critic for a long time now.

"If Trump is literally controlled by Putin to the point where Trump is forced to act in the best interests of Russia *at the expense of the US* -- which has been the prevailing claim not of Dem fringes but its mainstream -- how can it be morally justified not to impeach him???" tweeted journalist Glenn Greenwald in response to Pelosi's comments.

Related Topic(s): Collusion; Donald Trump Versus The Constitution; Impeachment; Pelosi-Nancy; Russiagate, Add Tags
Add to My Group(s)
Go To Commenting
The views expressed herein are the sole responsibility of the author and do not necessarily reflect those of this website or its editors.