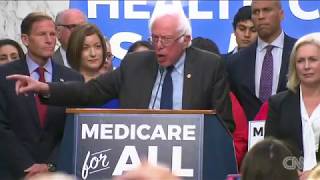 When the top Democrat secretly plots to subvert a proposal supported by the vast majority of her party, that's supposed to be news -- unless the corporate media decide otherwise.

"The plutocrat-owned press is protecting Pelosi from the extreme embarrassment."

Thanks to Bernie Sanders' presidential bid in 2016, his signature Medicare for All proposal is the litmus issue for Democrats in the unfolding 2020 campaign. With supermajority support among Democratic and independent voters and backed by more than half of Republican s, the single payer scheme was endorsed by a majority of Democratic candidates in November's House races. Most of the declared Democratic presidential candidates claim to back Medicare for All, including even New Jersey Senator Cory Booker, who has accepted more money from Big Pharma than any other member of his party. So compelling is the issue, a Politico-Harvard poll shows that fully 84 percent of Democrats want the party to make Medicare for All "an extremely important priority."

It should be huge news, then, that the top Democrat in Congress, Speaker of the House Nancy Pelosi, is actively working to discredit and sideline the most popular domestic political proposal of the century. But, apparently not. The Intercept's February 5 blockbuster, "Top Nancy Pelosi Aide Privately Tells Insurance Executives Not to Worry About Democrats Pushing 'Medicare for All,'" was picked up by only one "mainstream" corporate media outlet: Newsweek. In burying this bombshell, the plutocrat-owned press is protecting Pelosi from the extreme embarrassment of being caught conspiring with insurance companies to subvert Democratic voters' highest priority issue, with the obvious aim of derailing Bernie Sanders' anticipated second run for the presidency.

"Nancy Pelosi is actively working to discredit and sideline the most popular domestic political proposal of the century."

The Intercept got its hands on the slide presentation that Pelosi advisor Wendell Primus presented to Blue Cross Blue Shield executives on December 4. Primus assured the executives that Democratic leadership has "strong reservations" about Medicare for All and "would be allies to the insurance industry in the fight against single-payer health care." The slide presentation outlined Pelosi's three-prong attack on single payer:

1. Cost: "Monies are needed for other priorities."

2. Opposition: "Stakeholders are against; Creates winners and losers."

Primus's mission was to enlist the insurance industry as allies in Pelosi's planned counter-campaign to reduce drug prices, which is also good for Big Insurance bottom lines. But that requires assuring the insurance fat-cats that Medicare for All will, in Hillary Clinton's words, "never, ever come to pass." Pelosi's strategy is to orchestrate a defense of what's left of Obamacare while softening up the drug industry over prices -- in a possible alliance with Donald Trump, who signaled his willingness to partner with Democrats on the issue in his State of the Union address:

Related Topic(s): Medicare For All; Pelosi-Nancy, Add Tags
Add to My Group(s)
Go To Commenting
The views expressed herein are the sole responsibility of the author and do not necessarily reflect those of this website or its editors.