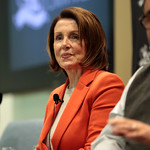 CNN reports this morning, complete with a video, that former House Speaker and present U.S. Representative Nancy Pelosi has donated the pantsuit she wore at her historical swearing in as first woman Speaker of the House, to the museum most of us think of as simply "the Smithsonian," the one that has Julia Childs's actual kitchen on permanent and prominent display. She knew her place. The Museum of American History that is actually one of many Smithsonian museums in Washington, DC.

Now Speaker Pelosi has added her historical pantsuit to the illustrious collection. How we've progressed. Now us girls are cross-dressing to take our place in the men's world. Actually pantsuits for women have been popular work and even more formal attire since the seventies at least, no longer the broach-at-the-bodice baggy mid-knee length dresses "old maids" wore, giving it all up to work at women's jobs, with notable exceptions, earlier in time. No Donna Reid's life, not even Honey Nelson's, which was sort of a brave rebellion as well as a farce.

Why couldn't Pelosi have worn a skirt, dammit? Pantsuits became HRC's trademark earlier and set the standard, much as Joan Baez popularized those expensive "ethnic" Indian bedspread cloth dresses back in the sixties, and sandals. But such garb screamed hippie, not workplace attire.

On Capitol Hill I've noticed that women government employees are partial to what I'd call cocktail dresses--sleeveless shifts with the bare arms Mrs. Obama was so fond of.

But, to the point, Pelosi's donated pantsuit will historicize how little progress women's executive positioning has made nearly sixty years after the Women's Movement first inspired us to pursue careers we love--to achieve what Betty Friedan dubbed "self-actualization." The pantsuit would be a fitting transitional outfit to unsex us. It might not be more comfortable. As a matter of fact, I heard from a man years ago that anatomically skirts were more comfortable for men to wear, and ditto pants for women.

Do pantsuits function in workplaces still male-dominated to unsex us to this day? As a mild form of the dress some Muslim women wear to efface their sexuality?

What's the answer? "Come you forces that tend on mortal spirits--unsex us [all] here [the workplace]"? to update Lady Macbeth's immortal words uttered as she prepares to murder Duncan.

Men and women in the workplace, all consenting adults. Would the requirement that all women adopt pantsuits as a work uniform limit the amount of hanky-panky that inevitably transpires, detracting from work efficiency?

I doubt it, but I still wish that Pelosi had donated a skirt suit instead--a suit in lieu of a dress probably most suitable for the occasion. Suits project gravitas. Pantsuits project masculinity. Cocktail dresses project.

Related Topic(s): History; History And The Present; History Cultural; Men; Pelosi-Nancy; Women, Add Tags
Add to My Group(s)
Go To Commenting
The views expressed herein are the sole responsibility of the author and do not necessarily reflect those of this website or its editors.