Five things to keep in mind, now that Speaker Pelosi says that "the president must be held accountable." 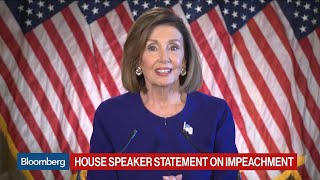 Impeachment is not hard.

The only thing that complicates the process is the penchant of politicians -- some well-intended but cautious, some cynical and scheming -- to weigh things down with too many strategies, dodges, delays, and compromises.

Let's keep this in mind, now that House Speaker Nancy Pelosi and House Democratic Caucus leaders have announced a formal impeachment inquiry intoallegations that President Donald Trump pressured the leader of Ukraine to investigate former vice president Joe Biden's family. Pelosi said, "The actions taken to date by the president have seriously violated the Constitution." She also says that "the president must be held accountable. No one is above the law."

Presuming Pelosi is correct, and presuming that she allows the House Judiciary Committee to do its job in the days and weeks to come, let's review the steps that are required to get impeachment right.

Identify clear abuses of power that can be broadly understood as affronts to the president's oath of office, which requires him to "preserve, protect and defend the Constitution of the United States." If the president used his office to get a foreign government to investigate a political rival, with an eye toward undermining that rival, that's a clear abuse of power that assaults the basic premises of American democracy. As Ron Fein, the legal director of the constitutional law group Free Speech for People, says, "Trump's Ukraine scandal is an impeachable offense," explaining that the House inquiry must examine the extent to which the president has been "improperly directing or endeavoring to direct a foreign power to investigate his own political adversaries."

Similarly, if the president used his position to enrich himself or his family, that is an equally clear abuse of power that violates the Constitution's emoluments clauses. Historic impeachment inquiries have been most effective when they have avoided examining laundry lists of impeachable offenses and paid attention to the most serious and provable complaints. Former House Judiciary Committee chair Peter Rodino and the team that went after President Richard Nixon in 1974 had many options; they settled on three and wrote articles of impeachment that were summed up in roughly three pages.

Related Topic(s): Impeach; Impeachment; Rights Denied; Trump, Add Tags
Add to My Group(s)
Go To Commenting
The views expressed herein are the sole responsibility of the author and do not necessarily reflect those of this website or its editors.