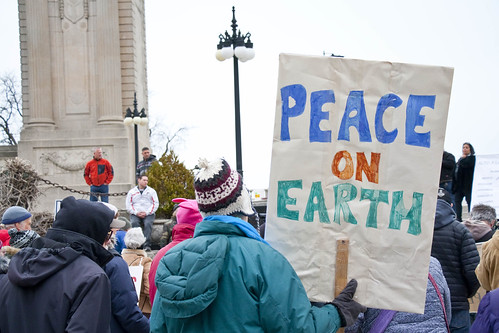 This article comes from January, 2010. The Haitian earthquake had just happened about a week before. It killed more than 230,000 people in a few seconds. A very small number of friends had sat-phones that still worked the morning of the quake, and their friends broadcast their reports in an informal instant-network of on-the-spot news.

1/19/2010 The quality of the information and messages here is extraordinary. My outrage is humbled by the quiet wisdom, patience and bedrock determination of the ones who have been on the front lines for years, who now simply take unbelievable disaster in stride, and continue to forge ahead, even if only by inches at a step.

I just completed some intensive Red Cross training to be an instructor in CPR/First Aid courses. The thing about Cardio-Pulmonary Resuscitation is that when it is indicated, even a bad job of it is an improvement. If a person is unconscious and not breathing, they will soon be dead if you do nothing. The methods developed for dealing with people in this condition have been boiled down to simple, replicable procedures that can be taught easily and learned quickly, and they work a whole lot better than doing nothing.

If Haiti is unconscious and not breathing, and has no pulse, we have waited to do something until after the point of brain death. Now we're doing the equivalent of making them get up and walk around. We need a CPR and First Aid for public disasters. We don't have it yet. We need a system of protocols, clear steps to be taken, at least as good as the Red Cross CPR/First Aid Lay Responders.

Then we need the equivalent of an ambulance service. We need a Rescue Expeditionary Force.

How many now? Ten thousand American soldiers landing in Haiti? What are that many soldiers going to do, in their full-battle-rattle? Imagining the full-scale military invasion now underway in Haiti. Armed soldiers "establishing perimeters" and "securing the airport" and "cordoning off secure areas," I can't help wondering what this would have been like if they had skipped all the arms and military equipment, and just flown in there with water, food, medicine and tents a week sooner. Field hospitals. Folding, floating bridges; instant runways; maybe a temporary base or three, for housing. Cellphone towers.

The Cheney/Bush Katrina response so lowered expectations that people have even remarked how well we're doing in the aftermath of Haiti's earthquake. But we're not: getting there a week late, after all the trapped people have died horribly in the dark, is not doing well at all. Imagine if this had been, say, Miami. In fact, imagine if Katrina had hit Miami instead of NOLA. We'd surely see a very different history.

What if we had a few carriers converted to hospital ships, a flock of C-130's, a thousand HUEY's, all painted white, with big red crosses on them? No guns. No assault troops or counter-insurgency forces. Just doctors and nurses and paramedics and counselors and babysitters and sanitation engineers and pre-fab school buildings and hospitals, water treatment plants and food service kitchens.

A natural catastrophe begins, an earthquake, a fire, a volcanic eruption, a flood, a tsunami. Within four or five hours, over the horizon we hear the thump of chopper blades and the drone of heavy cargo planes, and there they come: the Peace Army! Thousands of parachutes bloom over the devastated hillsides, dropping crates of water and ready-to-eat food and tents and mosquito nets. Doctors fast-rope to the ground from helicopters and begin checking people over, while assistants assemble field hospitals. Teams of people fan out, asking people if they're ok, what they need, how can we help?

And when the situation there is met with adequate, measured and appropriate support, people start training to replace the emergency teams with local, permanent staff.

What would the world think of a country that did that? As opposed to taking every advantage of people in no position to negotiate?

4/12/20 The latest catastrophe has, in fact, shown us what it would look like if a nation had a Peace Army. That nation is Cuba.

Related Topic(s): Catastrophe; Earthquake; Fire; Flood; Haiti; Invasion; Katrina; Peace Corps; Rescue; Training; (more...) Tsunami, Add Tags  (less...)
Add to My Group(s)
Go To Commenting
The views expressed herein are the sole responsibility of the author and do not necessarily reflect those of this website or its editors.