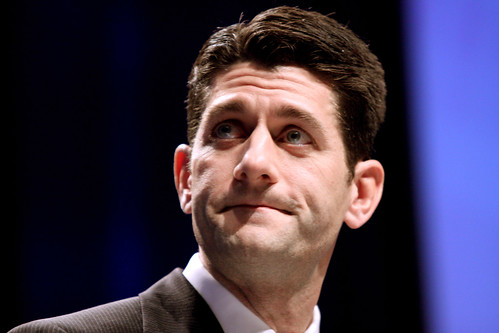 Some Americans have decided that Republican Speaker of the House Paul Ryan is a "moderate" who might have a restraining effect on GOP presidential candidate Donald Trump. This might be because Ryan's language is less combative and contentious than Trump's. But this is dangerously misleading, for the Speaker's apparent moderation is an illusion. The truth is that regardless of his choice of words, what Ryan stands for is as disastrously radical as the positions of Trump and the rest of the right-wing Republicans.

America's "newspaper of record," the New York Times, has caught on to this fact. In an editorial on Ryan's "economic agenda," published on 19 June 2016, the Times tells us that Ryan's vision for the U.S. economy is centered around a single, allegedly cure-all idea: "roll back hundreds of federal regulations that protect consumers, investors, employees, borrowers, students, and the environment." The paper characterizes this as a "corporate wish list." Ryan claims that this radical vision of deregulation is in line with Donald Trump's own economic agenda. Thus, electing Trump and maintaining Republican control over the Congress would most likely result in Ryan's plan being realized. The Speaker thinks this would lead to a period of economic growth that would benefit everyone -- an economic utopia. However, this prognosis is also an illusion.

In truth Ryan's plan would result in an economic dystopia -- a society characterized by human misery. This assertion is not based on simple disdain for Republican Party posturing. It is based on history -- a history of which Ryan apparently knows little. It is based on the fact that Ryan's deregulated economic experiment has already taken place and proved to be catastrophic. That is why the U.S. now has the regulatory system it does today.

What the House Speaker apparently wants to do is resurrect the so-called Gilded Age. That was the period of American history following the Civil War when the economy grew rapidly but in an unregulated fashion. If you will, the "Gilded Age" economy operated apart from the rule of law, unless of course you believe in the ideologically posited "laws" of capitalism and the mystical notion of Adam Smith's "invisible hand" guiding the marketplace.

During this period of U.S. history a small class of entrepreneurs got very rich (their mansions and palatial grounds can still be visited today). But they operated with no reference to the basic human needs, or safety, of the community they lived in. And so, in their own lifetime they were both envied and denounced, and soon became known as "robber barons."

The entire historical episode had a terrible dark side. If you think consumer vulnerability is a problem today, it was much, much worse in the era before regulation. For instance: most medicines ("patent medicines" often called "snake oil") were sold in adulterated condition; food products were also adulterated with cheapened or impure ingredients; child labor was widespread; unions were considered a form of restraint of trade; there was no minimum wage; there were no safety standards for workers; monopoly enterprises grew; banking practices led to one panic after another, running into the 20th century, and finally culminating in the Great Depression; there was rampant job instability; railroad practices ruined farmers in the Midwest; land, sea and air were polluted without restraint. This is the sort of conditions that arise in the absence of economic rules and regulations.

Paul Ryan acts as if he knows nothing of this dark side. And perhaps he really doesn't. He is an ideologue, and as such he cares more about his laissez faire ideology than he does about historic reality. He "knows" only what is filtered through the theoretical scheme to which he adheres. So it should come as no surprise that a free market ideologue such as Ryan has idealized, indeed has romanticized, the Gilded Age of economic expansion to such an extent that, for him, this distorted vision of the national past has been resurrected as a model for the national future. And how do we get back to this economic utopia? By eliminating all regulation and thereby turning the henhouse over to the foxes.

The New York Times editorial asserts that "the American people are unlikely to be comfortable" with Ryan's economic plans. Of course, "American people" is an unwieldy generalization. Certainly many of Donald Trump's supporters are backing him because of what they perceive as government interference in their lives. These individuals exaggerate individual instances of conflict with this or that regulation into a near hatred of all regulation.

Many others will support Trump for different reasons and won't even bother to give serious thought to Ryan's economic scheme. Presently, Trump and Clinton are running nearly even in several key states. Will this continue? If so, could it be that the Times has misjudged what the majority of the voting public might find "comfortable"?

Never underestimate the power of dogma when propagandistically spread about among people who do not know much history. As the propaganda spreads out, dogma replaces reality. Thinking automatically narrows. Of course, the Democrats will try to counter the GOP worldview, but they also are opportunists. If Ryan's passion for deregulation catches on, perhaps the Democrats will come up with their own compromise version of the Speaker's scheme.

Related Topic(s): Economic Collapse; Paul Ryan Budget Plan; Ryan-Paul, Add Tags
Add to My Group(s)
Go To Commenting
The views expressed herein are the sole responsibility of the author and do not necessarily reflect those of this website or its editors.