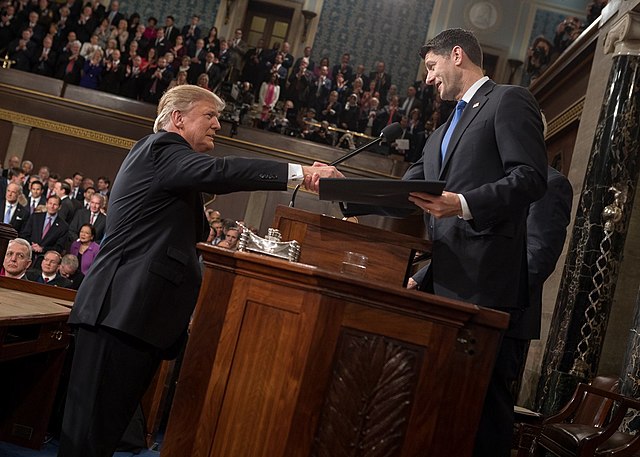 Asked at the close of the Constitutional Convention of 1787 if the delegates had created a republic or a monarchy, Benjamin Franklin is reported to have replied, "A republic, if you can keep it."

Paul Ryan has abandoned the effort to keep it.

At the heart of the US Constitution is a system of checks and balances that was established primarily to guard against the concentration of power in an executive branch that might tend toward royalism. The founders of the American experiment wanted to prevent a repeat of the monarchical abuses of King George III, against which their constituents had risen in revolution.

"The accumulation of all powers, legislative, executive, and judiciary, in the same hands, whether of one, a few, or many, and whether hereditary, self-appointed, or elective, may justly be pronounced the very definition of tyranny," warned James Madison, the essential author of the Constitution, who explained, "The great security against a gradual concentration of the several powers in the same department, consists in giving to those who administer each department the necessary constitutional means and personal motives to resist encroachments of the others."

What Madison asserted in the late 1780s remains true to this day: For the system of checks and balances to function, the leaders charged with responsibility for the various branches of government must zealously defend the authority of the branches they lead. They cannot allow one branch to become the extension of another.

This is the basic duty that House Speaker Paul Ryan rejected when he chose to make the legislative chamber subservient to President Trump's lawless executive branch. Ryan's abandonment of the Constitution began long ago. But it culminated with the speaker's decision to support Friday's release of a partisan memo produced by disgraced House Permanent Select Committee on Intelligence chair Devin Nunes (R-CA) to discredit law-enforcement agencies that have organized and supported inquiries into Trump-campaign and Trump-administration wrongdoing.

Related Topic(s): Constitution In Crisis; Donald Trump Versus The Constitution; Investigation; Nunes Memo; Paul Ryan; Trump Apologists; Trump Russia Connection, Add Tags
Add to My Group(s)
Go To Commenting
The views expressed herein are the sole responsibility of the author and do not necessarily reflect those of this website or its editors.